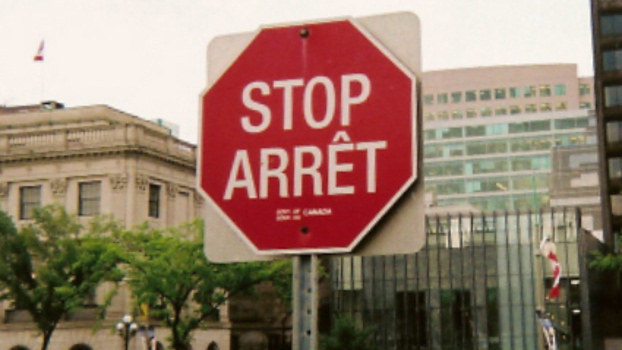 I was born in Quebec the same year that Bill 101, or The Charter of the French Language, was passed in the Canadian province. There was something strange, in terms of identity, about growing up an Anglophone in Quebec during the 1980s and 1990s. Canada is a settler colony, but Quebec feels itself to be the product of colonization. Although English, we nonetheless learned of the glorious history of New France, and the creation of Lower Canada, paired with the horrible Lord Durham Report stating that the French-Canadians did not have their own culture and it would be best that they were assimilated into the British majority.

It was my first exposure to a nationalist rhetoric, the business of nation-building, even if the nation in question was still a part of a larger country. I was, as an Anglophone, not a part of the narrative, not really. And even as a young kid, I recognized some of the holes in the story; I still have a clear picture in my head of a drawing of a demure-looking peasant girl, one of the “filles du rois” who were brought over to New France to marry the men who were here. We had been taught about how hard life was in New France, and what orphan girl from France would not relish the chance to come here, marry a man she had never met, in a new land?

And what of the Natives? We dutifully made our model longhouses, learned where the various tribes lived, but never spoke of the taking of Native lands, only of the English taking of French lands once the Seven Year War was over. We learned about Louis Riel only because he stood up to the English and spoke French and the fight was framed around linguistic rights. Nowhere were the stories of Residential schools, or of the Catholic missionaries and other representatives often violently repressing Native religion and spirituality.

All that changed in 1990, with what is known as The Oka Crisis. Issues of race and class and language came to head during the crisis. Building a golf course and condos on sacred burial ground. Blockades that prevented suburbanites from going to their jobs in the city. White people throwing stones at women, children, and the elderly. Hearing my parents and grandparents grumble about how much the Natives “already were getting out of our hard-earned taxes.” I was about to be a teenager, and I couldn’t understand why anyone would be so callous as to build a golf course over (what I understood to be) a cemetery.

The 1990s were a time of great tensions between the Francophone and the Anglophone and Allophone communities. Laws changed, and there were battles over store signs, lawsuits over someone in a store saying “Hi” instead of “Bonjour” when addressing a patron in a store… Our high school had a French side and an English side, and there would be brawls monthly after school. A separatist government was elected into power at the provincial level and as the Official Opposition at the federal level. Friends and I were often greeted with graffiti or taunts of “Anglos Go Home” when walking around downtown Montreal. When the 1995 Referendum came, it was my first opportunity to vote in my life: I voted against separation.

The Premier of Quebec blamed “money and the ethnic vote” after the loss. By money, he really meant the Anglophones. It was under that atmosphere that I decided that I was going to attend a Francophone university… to study English. My Anglo friends warned me that I would face hostility there, that I would be miserable, and that I was wasting my time going to a French university when there were perfectly good English universities I could attend instead. Friends who thought themselves so much more worldly than I because they had traveled overseas, but would never think to visit anywhere in Quebec other than Montreal.

College is often an utopic time for a youth, where you come into your own as a person. It was no different for me. Despite the warnings of my friends and family, I loved my five years in Sherbrooke. I studied Canadian and Québécois literature in a truly bilingual setting, made friends with people from across the province, and in fact from French-speaking communities from all over Canada, and learned a great deal about Quebec, its culture, and its people. My people. Nationalism became at once more problematized, but also more sympathetic to me than it ever had before.  I learned more about La grande noirceur, where the political class and the Church worked together to keep Quebec in “a Dark Age”, and about the Quiet Revolution that followed in the 1960s. I read radical Québécois literature alongside nationalist English-Canadian works, in an environment that challenged my thinking on a host of issues around race, class, and language.

Of course, all good things must come to an end, and starting a PhD on the other side of the country is a good way to realize that your bilingual bubble of goodwill isn’t shared. Resentment out West for the special treatment Quebec was seen to be getting. Resentment by the French populations of Western Canada for the erasure of their presence and identity. Realizing that most people didn’t care about Canadian literature. Going to a postcolonial conference and being dismissed because, as an eminent scholar put it to me, “I don’t read theory in French.” Seeing the colonial mentalities everywhere, but still especially in myself.

Move to the United States. I grew up in a racially homogeneous area, in a country with a different history of racial strife. But in the States, I realized how fraught my ignorance of the history and significance of race in particular really was. Teach at a Hispanic-Serving Institution. Teach at an HBCU. Teach at a regional state university in one of the poorest rural regions in the country. Watch, listen, measure my reactions. Get on Twitter and diversify my timeline in a way that stretches my thinking on race, class, gender, and intersectionality.

I tell this story because it has been less than five years since I’ve taken the time to think about being a body within a colonial and colonialist setting, even still today. How my students are also navigating through the messages they are getting about their place, their position, their due, and their view. I am an educator, getting an education, undoing another education, making another.

Lee Skallerup Bessette grew up Montreal, Quebec, Canada. She holds an undergraduate degree in Professional Writing, as well as an MA in Comparative Canadian Literature, from the Université de Sherbrooke. Her Ph.D. is from the University of Alberta in Comparative Literature. Her academic interests are varied and include postcolonial speculative fiction, contemporary Haitian literature, translation studies, and life writing. She primarily teaches writing, and thus is also interested in pedagogy, non-traditional learners, and the integration of technology and social media in the classroom.

Lee is a member of the editorial collective at University of Venus, and maintains a blog at collegereadywriting.blogspot.com and a Twitter presence at @readywriting