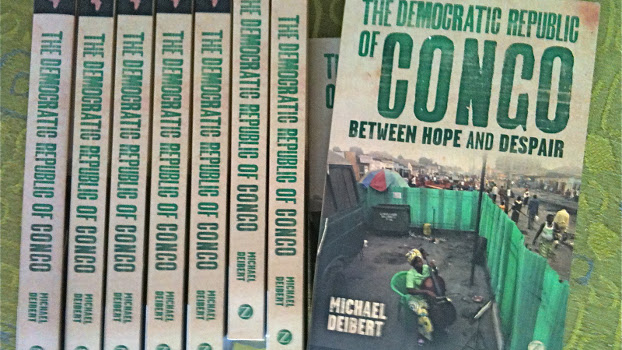 Michael Deibert’s The Democratic Republic of the Congo, Between Hope and Despair is a 260-page well-researched book compiling Congo’s struggles dating back to the 15th century (the moment when the Congolese people commenced interactions with Western actors), to the recent 2013 developments affecting security in the Eastern Congo. A journalist by profession, Deibert presents the evidence-backed facts in language accessible for all audiences. The book is divided into ten chapters, each describing a key episode that shaped the war in the Democratic Republic of Congo (DRC). He often discusses a central character or organization, and details how they fit into the broader picture and what impact they had in shaping the country’s history.

One of the many things I appreciated while reading the book is the clear highlighting of the role that the Rwandan and Ugandan governments played, particularly the personal involvement of the two dictators, Paul Kagame and Yoweri Museveni, in the war in DRC. Their motives, their modus operandi, the people they used, the ideologies they espoused, as well as the support they continue to receive from their American allies, is well documented via interviews, reports, articles and a previous book on the DRC. In fact, the involvement of these two countries is so deep that the chapter on the war in DRC begins with a compelling account of living conditions in pre-genocide Rwanda, moves on to the genocide itself, and the retribution of revengeful Rwandan soldiers deep in the forest of DRC, massacring Rwandan Hutu refugees, as well as DRC citizens.

The role of mineral riches is also very well presented. At first, the mineral trafficking was indeed a financial means of sustaining the costly hunt for the Democratic Forces for the Liberation of Rwanda (FDLR) and other international armed groups, but quickly, smuggling riches out of the DRC became an end in itself. This burgeoning economic activity encouraged the mushrooming of faction after faction in corners where State authority could not be enforced.

Mining activities were conducted either through artisanal mining (rebels) or through direct contracts with the government (such as Angola buying a diamond exploitation monopoly for the derisory price of $20 million). Once opened, this door could not be closed and at various levels national and international political leaders and warlords used resources from DRC to fill their own pockets as well as fuel the war.

As the author moves toward interpreting the situation, the passivity of the United Nations Organization Stabilization Mission in the Democratic Republic of Congo (MONUC) (later MONUSCO) is particularly worth reading about. While their mission to protect civilians and enforce peace was clear in their mandate, they stood by, “observing” as hundreds, if not thousands, of civilians were massacred in Ituri, South Kivu, and North Kivu. This, and the tacit blessings of the US, UK and other actors of the so-called international community, was captured quite well and in great detail by the author.

In an extraordinary tour de force, the author packs 550 years of Congolese history into the first forty pages. However, this account of the DRC’s history should have focused more deeply on those elements that have led to the current crisis instead of the personalities of the key players. It is notable that the DRC’s history is not the only reason for state failure and ongoing unrest in certain regions.

While the book is rich in information, dates and places that are very familiar to those living or working in the DRC might confuse a reader who is unfamiliar with past and present events in the DRC, and may erroneously reinforce the false perception that the DRC crisis is a conflict so complex that it cannot be resolved or understood. The book would have benefited from more maps and illustrations for the non specialized reader. It does not appear, for example, that different regions of the country experienced war at different times. The Eastern city of Bukavu for example has been at peace since 2004 while its northern sister, Goma, was under M23 siege in 2012. The CNDP/M23 episodes affected the southern part of North Kivu, leaving provinces like Katanga, Bas Congo, Kasai or Bandundu very far from that conflict.

As with many books written about the DRC, the presence of Congolese heroes who have worked tirelessly in the field to influence the national and international agenda seems missing. The book seems primarily about the roles played by international actors in the Congo, and less about the Congolese people themselves. They are presented either as either passive victims or naïve pawns used by foreign powers to conduct their criminal agendas on DRC soil. The unity of all Congolese parties during the struggle for independence has been minimized. The peaceful and non-violent demonstrations that brought down the Parti-Etat, organized by the Catholic Church, and the relevant political opposition have not been emphasized. When the author covers the Intercongolese Dialogue in Sun City, he fails to demonstrate the role played by civil society. Even when he mentions the denunciation of Rwanda and Uganda by international bodies, the author does not acknowledge the roles of Congolese whistle blowers, lobbyists and activists both inside and outside the country in shaping the Congolese political landscape, forcing the UN and European countries to name Rwanda and Uganda as instigators, and to take measures against them.

At times the Congolese actors are painted in black or white terms, and the social and political contexts under which they took certain decisions are not readily evident, despite the contextual relevance at the time. As an example, on page 95, in 2002 Joseph Kabila is already presented negatively when many Congolese still believe that it is the failed checks and balances in the DRC institutions, inherited from previous regimes and not addressed by the Sun City dialogue that changed him from a peacemaker into the authoritarian leader he now is. The overemphasis of the leaders’ ethnic origins was unnecessary in cases where tribal affiliation played a minimal role. It is easy to simplify situation of the DRC by grouping actors based on tribes, and it could even be misleading in some instances to think in terms of tribes when other interests were at stake.

Despite this, however, the work is a must-read for all who seek to understand the different factions and involvements in the DRC, and how the fate of the DRC is linked, in general, to the stability of the region, or lack thereof. Rather than being more broadly about development, diplomacy or economics, Deibert is principally focused on the engagement of national and international actors in the DRC security landscape and the ensuing complicity in mass murder that armed forces have perpetrated on the DRC soil. After encountering all the difficult facts presented in the book, the reader faces an important question: “Now what?” Now that we know about what happened, what comes next? Now that we have learnt about the despair, what hope do we have for the DRC?

Soraya Aziz Souleymane is a rising academic and development specialist, with a special focus on rural communities around extractive industries operations. She holds a Masters in Development Studies from the University of Sussex, as well as a postgraduate degree in international relation from the Cambridge Association of Managers College. Most of her writings are about development, governance, and conflict resolutions in the DRC. Based in Phoenix, Arizona, Soraya is currently part of the Next Generation Leaders, a leadership program of the McCain Institute, houses in Arizona State University. Ms Souleymane is also a Chevening alumna and Miss Leadership DRC for the year 2011.