Dr. Amanda Rogers, a member of our editorial board, recently delivered a lecture titled “The Strategic Success of ISIS Propaganda” at the University of Madison-Wisconsin, where she is currently an AW Mellon Postdoctoral Scholar. The full lecture, which explores the complexities of politics and aesthetics, is available courtesy of the University of Madison-Wisconsin’s Center for Humanities.

Abstract
To borrow the words of Judith Butler, “if we are interested in arresting cycles of violence to produce less violent outcomes, it is no doubt important to ask what, politically, might be made of grief besides a cry for war.” For reasons that will readily become apparent, the present lecture derives not simply from my professional area of expertise, but also from an uncomfortably personal connection. Of course, the spheres of personal experience, political convictions, and academic work are never as separate as one might like to believe, imagine, or pretend. On rare occasions, however, these closely related arenas intersect more fully—one might even say violently. “Strategic Success of ISIS Propaganda,” was, in fact, prompted by precisely such a brutal collision—provoking painful self-examination, at levels personal and cultural.

This analysis of ISIS propaganda is limited to a singular genre of production that I title: “The Beheading Series.” This infamous video set, comprised of four installments, depicts the decapitations of Western journalists and aid workers, including—at the time of writing—James Foley, Steven Sotloff, David Haines, and Alan Henning. These political snuff films have prompted a heightened level of global hysteria, media hyperbole, and inflammation of viral fear that comes closest in intensity to the immediate aftermath of September 11, 2001. But on that day, an atrocity was committed on American soil, and claimed thousands of casualties. Here, however, pixelated screens mediate and distort the atrocity, in terms of both space and time (“over there” seems yet “over here”); the death toll of U.S. citizens numbers merely two. What makes ISIS propaganda more horrifying than its terroristic predecessors? Stated differently, how does it succeed—and why? Further, the necessary questions are not simply “what” is different, nor “why,” but also—how? And—for whom? 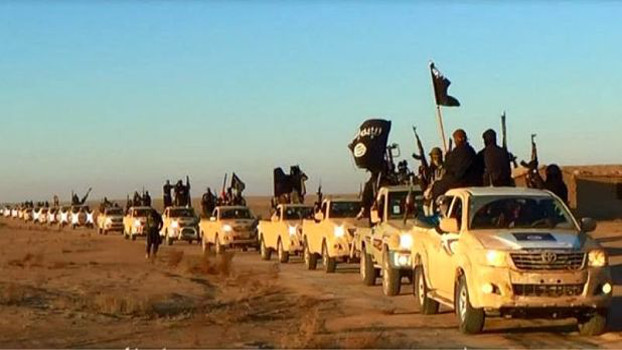 I argue that the “Beheading Series” is not a recruitment attempt. Rather, this set of films is best understood as an advertisement campaign for apocalyptic war (or, “reverse recruitment”)—an extremely effective use of viral marketing techniques, that draws from horror films, video-game-style “immersive media,” and models of public diplomacy’s “soft power” arsenal—i.e., the “branded nation.” “The Beheading Series” belongs to a particular genre of propaganda, produced for a specific body of consumer-spectators, coded “the West.” Successful PR, after all, requires “knowing the audience.” And ISIS knows quote-unquote “us” very, very well. I demonstrate that the group’s media sophistication includes the deliberate exploitation of Islamophobia (with which Western cultures currently wrestle), and thrives within the (now) invisible distinctions between the spheres of entertainment, politics, and news.

Finally, against this lecture’s thematic backdrop, I also argue for the cultivation of visual literacy as an increasingly urgent tool for critical political analysis. This essential skill enables recognition of an influential connection rarely—if ever—voiced in public forums, such as the global mass media. I refer here to the intertwined relationship between the intense power of emotional affect, and the nebulous sphere of “geopolitics,” a connection that is particularly pronounced in our collective transnational context—i.e., consumer capitalism’s globalized marketplace. By purchasing ISIS advertising as if an “impulse buy,” the political arena and news media—however unwittingly—serve as (to borrow a term from security studies) “collective force multipliers.” The ad campaign, literally, goes viral—and most ominously, entirely by design.

Amanda Rogers received her PhD from Emory University in 2013, with primary fields of concentration in Art History and Middle Eastern Studies. In addition to her academic career, she is also a photographer, political analyst, and journalist, whose work has appeared in a number of forums, including: the Frontline Club, the BBC World Service, Al-Jazeera, The New York Times, and Kifah Libya. Amanda also serves on the editorial board of the Postcolonialist, as staff writer for Muftah, and columnist at Aslan Media Initiatives. Her current book project,Semiotics of Rebellion From Morocco to Egypt: Advertising Revolution and Marketing Allegiance Beyond the Arab Spring, is presently under contract with University of Pennsylvania Press (International Relations and Public Policy series). Drawing upon extensive fieldwork throughout the Middle East, North Africa, and Europe, this book offers a novel analytical framework that foregrounds the politicization of image.