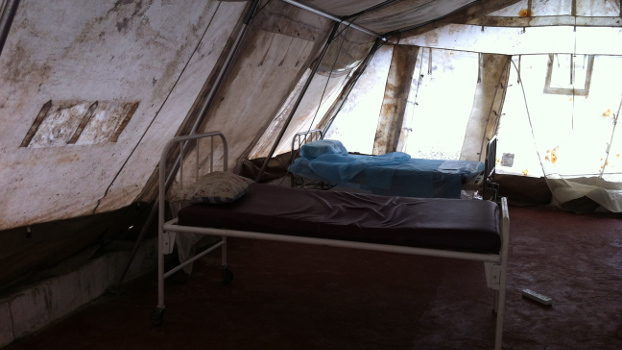 The Ebola epidemic in Guinea, Liberia, and Sierra Leone, and the international response to it, has reprised contentious questions about postcolonial paternalism in Africa.  This satirical piece reflects upon these issues and comments on the implications of global inequality and the mistaken but continued relegation of the African continent to an ‘otherworldly,’ unknowable place in the minds of many outsiders.

First, there was the balkanization of the response to address a problem ostensibly caused by a contemporary Berlin Conference –directives out of the Washington Consensus. Thus, France responded to Ebola in Guinea, its former colony. The United States responded to Ebola in Liberia where some of its former subjugates had grudgingly returned about two centuries prior. And the greatest colonialist of them all, Great Britain, reluctantly took charge of its former burden Sierra Leone.

How neat! But was this the best approach by which to tackle one of the most deadly viruses known to man in the 21st Century?  In the middle of 2014, Ebola was raging in Liberia. The country had the highest number of recorded cases and casualties per day. Then Liberians wailed out to Uncle Sam. The might and cavalry of the United States military came charging in. It seems that this time, the response to a viral epidemic will be militarized, according to Adia Benton. Before long, the numbers began trending downwards in Liberia. Sierra Leoneans cried, “oh Britain where art thou?”

Then there is France. Vive La Postcolonie! Patron François Hollande paid a visit to former charge Guinea. There were many promises of sending Ebola in Guinea back to the gates of hell. Back to the dawn of colonialism? The most memorable of Hollande’s photo ops in Guinea was, of course, that of him gazing into the deep eyes of a beautiful Guinean lady who was head of the Ebola Survivors Association in Guinea. Oh her beauty! What beauty? “If only”…a perfunctory sigh of regret. Colonial “mistress,” reversed? Did Julie quiver several thousand miles away in the métropole? Will she be next? Were scooters dashing out of the Elysée Palace at breakneck speeds for midnight trysts for Françafrique?

But let us proceed to the facts. What do Kent Brantly, Nancy Writebol, Rick Sacra, Craig Spencer, Nina Pham, Amber Vinson, Ashoka Mukpo, Thomas Eric Duncan, and Martin Salia all have in common? All of them, at some point, were actively sick with Ebola on United States soil.

Now let’s go to another much shorter set of names, what do Martin Salia and Thomas Eric Duncan have in common? They are the only two people known to have died of Ebola on United States soil.  There could be medical and biological factors accounting for the difference between the fates of Salia and Duncan and the others, or other yet unnamed factors. But no matter the spin or twist on it, you cannot easily get past the inescapable fact that the only people to have died of Ebola within the mighty trillion dollar, formidable, United States healthcare system were Africans from two affected Postcolonies.

We constantly keep tabs on subaltern elements in Postcolonies to ensure they stay firmly within our ideological line. Agents are admonished to work harder in order not to leave any space for terrorists and anti-Western ideologues to occupy and ferment trouble. “Tap phones if you can!” “Extraordinarily render if you must!” “No holdbacks.” “We’re in the fight of our lives.” “The clash of civilizations is at hand!”

Yet from December 2013 to March 2014 no one knew that one of the most deadly pathogens known to man was decimating innocent populations in the jungles of the Postcolony? Would we have known earlier had a pesky anti-Western ideological ferment taken root instead?

The noblesse obligé of indulgent colonial maternalism led France and Britain to come in only when indescribable things had hit the ceiling. “Manifest destiny must be fulfilled.” “We cannot leave these helpless Africans to perish lest we find the problem at our doorsteps in the morning of reckoning.” “They cannot fend for themselves.” “We must help them.” This is the “white man’s burden,” to quote the venerated Basil Davidson.

In time, an emergency response was scrambled to challenge the virus. Too little, too late? Where was the response when Ebola festered for over three months orphaning innocent children faster than drones?

Many have blamed weakened local healthcare systems for enabling the spread of the virus, but what is the response when African politicians pillage their countries to support ostentatious lifestyles in Western métropoles? As the health systems crumbled most paid, and still pay, lip-service to the effectiveness of aid.

Commercial flights to the three most affected countries have long since been restricted lest anyone repeats Eric Thomas Duncan’s folly in thinking he could transport Ebola to Western shores. But where is the response, even now, as politicians in the affected countries send their girlfriends, wives and children to the safety and comfort of the same Western shores as they abandon the poor to their Ebola doom? WHERE ARE YOU?

Even the explanations of the origins of the virus smack of imperial arrogance. First we were told by no less an authority than a study published in the respected New England Journal of Medicine that patient zero of the outbreak was a two-year old boy in the forests of Guinea who contracted the virus by eating fruit bats. Imagine a two-year old independently acquiring and consuming a fruit bat! Then the origin of the outbreak was recently re-explained as patient zero having contracted the virus NOT from eating the fruit bats, but from coming into contact with their droppings while playing with other children in the hollow of a tree in his village.

But what explanations have been offered by Guinean, Liberian and Sierra Leone scientists for the origins of the Ebola virus in their countries? Wait, are there scientists in the Postcolony? Who is a “scientist,” anyway? “We tell you who scientists are, or not, because we train them –we train the best in the world.”

“In any case, dismiss anything anyone from the Postcolony says. It’s all conspiracy theories and wild figments of the imaginations of a vanquished people.”

For Guinea, Liberia and Sierra Leone to survive Ebola and the next calamity that could be lurking around the next bend, they will first have to survive postcolonial imperialism and the self-interested dictates of the consensus in London, Paris, Berlin, and Washington.  The Ebola epidemic served as a reminder of colonial frameworks yet to be overcome.

Fodei Batty, Ph.D.: Fodei Batty, Ph.D. is an assistant professor of Political Science at Quinnipiac University who hails from Sierra Leone. He has also worked as policy analyst in the Office of the President of Sierra Leone. Dr. Batty works and publishes on Africa and wide-ranging issues on the politics of the developing world.