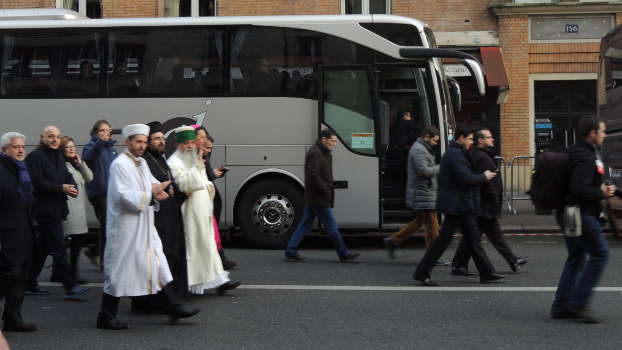 On sabbatical in France, two days before the attacks in Paris I delved back into an essay in progress on immigrant and ethnic minority writing.  Writing it has required solving a riddle: how does one meaningfully discuss ethnic minority writing in France when there are no words for it in French, when “ethnic minority” is absent from social vocabulary?  Having just completed a 2015 French census form, I can attest that two defining categories for identification remain: French or foreign.  Of course, ethnic minority writing exists in France, but the fact it exists doesn’t mean that it has equal currency in France or a direct translation into the French language.  It is no surprise, then, that its writers are marginalized within both the French literary establishment and the French university system.  It was with this essay and its contents (or discontents) on my mind that I attended the Republican March on January 11, 2015 in the wake of the terrorist attacks in France against Charlie Hebdo and the kosher grocery store.

When it came time to leave for the march, I hesitated, but in the end I went, sensing the urgency of the moment.   The most moving moment for me was seeing a rabbi, imam, cardinal, and Greek Orthodox priest walking with locked arms.  But the diversity of that quartet was quite unique, and when I looked around at the marchers, they looked homogeneous on the whole.  France’s diversity had not come to the march in force.  The next morning when I walked into a press stand, the front covers of the dailies Aujourd’hui and Le Parisien featured the same shot (centered differently only by a centimeter) of a group of similar-looking people around a French flag at Place de la République.  I couldn’t help thinking I was looking social and ideological reproduction in the face.  I deplore the attacks on Charlie Hebdo and the kosher grocery store, but in terms of the nation’s response I couldn’t help wondering if there shouldn’t be a new reading to the dominant French interpretation of those republican values that have remained the same since revolutionary times and that were clearly in focus here  – “la laïcité” and “la liberté d’expression.” 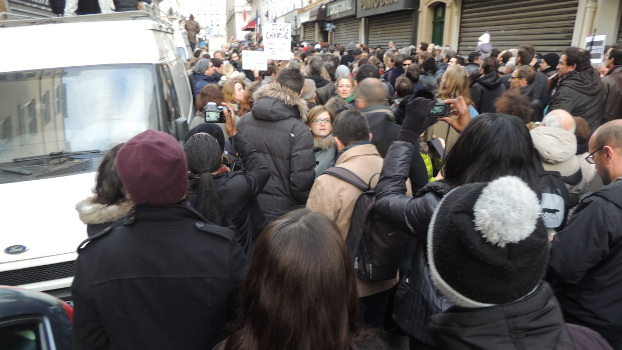 News headlines immediately grabbed hold of the slogan that has paced the debate since: “l’unité nationale.”  But national unity for whom and among whom, I wondered.  In the weeks following the attacks, the debate has turned toward such issues as the place of a history of religions in schools (though what of colonial history and decolonization?); the exclusion faced by ethnic minorities in France, particularly young men for whom the unemployment rate reaches 40-50% in some disadvantaged banlieues, all marginalized from the sphere of work and decision-making; the fact that in these same neighborhoods single-parent families are twice as numerous as the national average and that the high school drop out rate has not lowered over the past twenty years.  In the disaffected banlieues, a conspiracy theory about government and intelligence service involvement in the attacks is mounting among young people (interestingly, it has also been mobilized by the far-right Front National’s founder and icon Jean-Marie Le Pen), pointing to the distrust they feel for the government and French institutions.  Teachers who have been charged with unpacking the attacks are overwhelmed by this skeptical stance, but also cognizant of the challenges their students face and the disenfranchisement that sometimes grows out of them.  Are these students driving a wedge in national unity, or pointing to one that already existed?

By and large, those on the inside, including leaders on the right and left in France whose views concur on “la laïcité” and “la liberté d’expression,” are calling for a reaffirmation of republican values – more of the same, while those on the outside are asking to be seen and heard.  If the debate is to be honest, some hard questions will have to be asked: Is responsible freedom part of the “liberté de l’expression” in France?  Some have perceived that one, or perhaps two, male phalluses figure as the Prophet Muhammed’s head and nose in the Charlie Hebdo published a week after the attacks (which would be in keeping with the style of its cartoonist Luz).  If that is the case, the cartoon borders on pure vulgarity.  To view this cartoon as a unifying symbol for freedom of expression confounds me.  As Muslims around the world protested this most recent cartoon, and newspapers in Great Britain and the United States, including the New York Times, have decided not to reprint it, French exceptionalism appears to have resurfaced.  Indeed, how can wearing a headscarf in school be bound up with a version of “laïcite” that allows for Christmas to be named and celebrated in schools, but does not allow for observance of the Islamic holiday of Eid to be accepted as an excused absence?  On this point, do the French have a consensus on what it means?  Anne Hidalgo, born in Spain and now Mayor of Paris, has called laïcité respectful of all religions, while many others see it as espousing the total absence of religion from public life and institutions.  These are obviously two very different things.

For a country that has diversified considerably over the last 50 years, especially as a result of postcolonial immigration, and today has the largest Muslim and Jewish populations in Europe, France owes it to itself, all of its citizens, and the world beyond to take an honest look at how it has acknowledged and integrated its internal diversity, including but not limited to its religious minorities.  Part of that is recognizing the diversity of belief among the Muslims of France, and recognizing that “Muslims of France” does not correlate directly to the people it is meant to designate given their wide-ranging spectrum of belief and practice.  “Muslim” isn’t synonymous with people with origins in a Muslim country – take for instance the Charlie Hebdo editor who died in the attacks, Mustapha Ourrad.  And “Muslim” isn’t synonymous with immigrant; just as “immigrant” isn’t synonymous with the ethnic minorities of France who still have no way of being named as such.

A curious advertisement by the private TF1 television station has preceded some recent films I’ve seen and aims to counteract prevailing pessimism about France’s decline. The advertisement contradicts stereotypes about the French, and ends with “Partageons des ondes positives” [Let’s spread good vibes].  It’s safe to say morale in France has been low.  The recent Republican March has certainly buoyed morale, as well as François Hollande’s and Manuel Valls’s popularity ratings.  But the real test will come with time.  While France decries the literalism of other national ideals, particularly those in Anglo-Saxon countries, it remains unwilling to inspect the exclusion created in the republican ideals laid out in the Déclaration des droits le l’homme, cited very often these days, and to move them forward.  To not do so would seem to be turning a blind eye to reality.  And now back to my essay, or back to the conundrum of ethnic minority writing, which exists in reality but not in the French language.

All images featured in this piece are copyrights of the author.

Laura Reeck:  Laura Reeck is Associate Professor of French at Allegheny College in Meadville, PA.  Specializing in postcolonial French studies, her research interests include the Beur/banlieueliterary and cultural field, ethnic minority writing in France, the harkis in literature, and contemporary literary movements.  She is the author of Writerly Identities in Beur Fiction and Beyond (Lexington Books, 2011 ; paperback 2013).  Her most recent articles have appeared inContemporary French and Francophone Studies, Francophone Postcolonial Studies, Hommes et migrations, and Sefar.