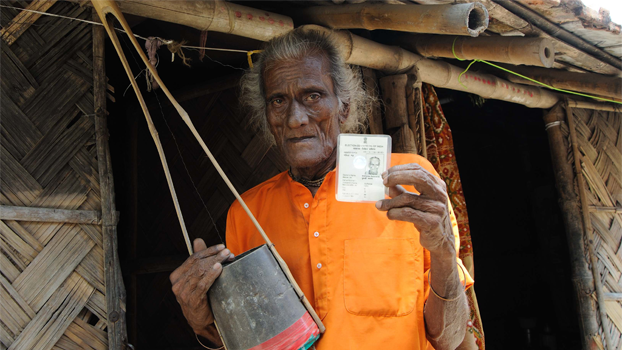 Editor’s note: Given the timeliness of the content, this Academic Dispatch is an advance release of Issue II, Volume I, which will be released in full in the coming weeks.

The West, as the representative model of order and stability in the international system, surveys the possibilities of peace and conflict in potentially significant geo-strategic zones. The West as the global policeman is also seeking potential allies that can help regulate and facilitate access to resources. An election in a postcolonial country is an important barometer in making these calculations, and therefore a subject of intense surveillance by the West. Elections in a postcolonial country come under the gaze of the West usually if it is with regards to a former colony ravaged by warfare and subject to the reconstruction efforts of the West.

The West is often involved in sending election monitors to supervise elections in these countries. But this year the elections in India, an independent country with a vibrant democratic system, has gained unprecedented visibility and is the subject of intense debate in the West.[1] The ongoing trauma of postcolonial experience has come alive during the current elections in India. Newspaper and academic articles introduce this subject with numerical citations on the size of the electorate (814 million) and are keen to label the political system as a stable ‘democracy’ in order to weigh in on the significance of an election in a postcolonial country.[2] These enormous figures and political labels on legitimacy help attract the attention of Western audiences by helping to focus their gaze on a far away landscape and give a sense of importance to the subaltern.[3]

These elections have made visible in an unprecedented manner the agony of a painful colonial legacy that the nationalists tried to subvert. The old and dirty colonial legacy of divide and conquer, playing upon distrust between the Hindus, the Muslims, the Sikhs and many others continues as  these are now regarded as ‘vote banks’ for parties contesting elections. Take for example, the two main political parties: the Bharatiya Janta Party (BJP) issues a majoritarian appeal to the Hindus to unite, and the Congress woos the Muslims as a minority that needs to be protected by a secular force. Sonia Gandhi, the current president of the Congress party has made deliberate efforts to reach out to the Muslim clergy to ask them to mobilize popular support in their constituencies in support of her party.[4]

The legacy of a colonial education too has had visible effects on the electorate. In order to establish its own ideological supremacy, colonial education deliberately castigated any nationalist attempts to foster an alternative ideology such as Hindutva as inferior, subversive and a threat to modernization.[5] The imported ideologies of liberalism and communism have been taught for generations, but any engagement with indigenous ideologies such as Hindutva is actively discouraged and dismissed as rabid. This has generated an atmosphere of fear and suspicion that has little patience for investigating the factors that have encouraged the BJP to resort to Hindutva, and the impact of electoral politics on this ideology. The BJP is repeatedly attacked as a divisive and anti-secular force trying to rewrite history in a manner that will split the country and undermine its democratic institutions. These insecurities and fears became most visible with the unprecedented act of a college principal issuing a special message on the college website and sending official emails to students in a deliberate attempt to influence their decision to vote a day before the polls opened.[6]

The subaltern has tried to thwart these colonial legacies of ‘divide and rule’ and colonial education through the civilizing catharsis of a written constitution with its antidote of secularism. This helped the subaltern gain recognition as a sovereign state within the international community. It is respect for this constitution that is now being reiterated by the established political parties as they try to temper and discipline new political parties such as the Aam Admi Party (AAP) entering the political fray. The lack of respect for constitutional procedures has generated concern about impending anarchy should this party come to power. In an act of frustration or in an effort to propose an alternative identity that is capable of even questioning this constitution, Arvind Kejriwal, the leader of this political party did not even hesitate to proclaim himself an anarchist.[7] This rash proclamation sent alarm bells ringing through the corridors of power both within the country and overseas. The strong backlash has now compelled Kejriwal to retract and issue a statement that he is committed to working within the modalities of the Indian constitution.[8]

These experiences have created a paradox where a postcolonial country is on the one hand applauded for being a vibrant democracy while on the other there is an embedded sense of fear, trepidation and uncertainty among the political pundits. At regular intervals alarmist trumpet calls alert the West to the unpredictability of the outcome of these elections and the future political trajectory of this country.[9] The seriousness of these dangerous threat perceptions is complemented by the old game of caricature and stereotyping. This strategy of deploying political cartoons is claimed by the West to have been introduced to the illiterate Orient that only with the help of simple visuals could learn to appreciate politics and political humour.[10] This strategy has now gained much popularity and traction in Indian culture and politics. The Oriental stereotypes of the ‘pandit’ and the ‘mullah’ created by the West are now regenerated and reinvigorated to lampoon political candidates and their religious affiliations. The caricature of Baba Ramdev in his saffron robes is a case in point.[11] The satirical intonations and depictions of ‘Madame Sonia’ as a gesture towards her Italian ancestry invoke loud laughter from mass audiences attending public rallies.[12]

Similarly other ideological tropes such as Fascism, Nazism and ghettoism are being evoked as threats to the much vaunted secularism and feminism.[13] The sly civility in the evocation of these particular tropes should not blind us to the politics behind their careful deployment. The politics of engaging and educating the West in its own language about other locales is based on a subtle assumption that the West can only comprehend violence if the subaltern willingly partakes and shares a vocabulary familiar to the West, crafted in its own experiences of epistemic violence. Any narration of suffering can be of sustained interest only if it finds resonance in the West. The universality of experiences of suffering and any struggle against them can only be described in a language of human rights as a standard of civilization sourced from the West.[14] So immersed is the subaltern in her Western experiences of learning and conceptualization that there is little need to pause or any attempt to articulate these experiences in local terms such as the need for sadbhavna (goodwill towards all)  or satyagraha (sacrifice and penance). The articulation of these concepts by some politicians that escaped the Western fount of learning still imparted in missionary schools in the Orient is dismissed as nonsensical.

The acute sense of vulnerability and shame that is experienced by the subaltern now  scrutinized by the West is couched in assurances of a predictable foreign policy and ministers treading the beaten old path regulated by an elephant bureaucracy.[15] The clerks under a colonial regime were always the acclaimed loyalists and in a post-colonial India their briefings to the elected candidates would secure their proper adaptation and adherence to the international protocol. These assurances mimic the confidence of a new post-colonial intellectual and political elite that in the immediate aftermath of its new found independence is eager to demonstrate to the West its capability to govern in a responsible manner.  In this election as soon as the manifesto of the BJP suggested a possibility of revising India’s nuclear doctrine this was taken very seriously by the West.[16] The party leadership had to issue an immediate clarification of adhering to a no-first use policy. These gestures are representative of a desire to assure and appease the West by the postcolonial elites that no matter which political party comes to power India will not make any radical changes in its nuclear policy.[17] These practices continue as exercises demonstrating the rational mind of the subaltern.

As the elections are being constested these facile attempts at mimicry to reconcile and assure the West that we will be rational and steer the beaten path in our foreign and economic policy continue unabated and find a place in leading academic and journalistic publications in the West. Regular assurances are issued that India will not deviate from the path of neo-liberal economic reforms and will maintain the status-quo vis-à-vis its neighbours and the West.[18] Political candidates are evaluated in terms of their relationship with the US and China as two powerful economies interested in doing business with India. The US is still ambivalent about issuing a visa to Narendra Modi, the BJP candidate, but has not hesitated in making overtures by sending its ambassador for a private meeting with him.[19] The hesitation of the West to embrace an electoral frontrunner renders Modi a more palatable candidate to non-Western countries such as China that have expressed much faith in his ability to do business and improve relations.[20]

The postcolonial trauma of the subaltern is unending. It is only in moments of crisis such as these elections that it becomes visible with such force. The ritualistic exercise of an election will run its course. But how will the subaltern sustain the gaze of the West? How will the subaltern escape the violence of being subject to the West’s scrutiny and discipline? Will the subaltern continue to suppress its need to question the divide and rule politics taught by the colonizers? Will the subaltern keep aspiring to the ‘superior’ status of the modernized and condemn as inferior any conversation with its own remnant ideological strains? Will the subaltern cling to the constitution as its only recourse to any demonstrated capability to reason and govern? The spectacle continues, and the West is for the time being mesmerized.

Dr. Ritu Mathur is a Banting Postdoctoral Fellow at McMaster University, Canada. She seeks to make visible human suffering through her postcolonial analysis of developments in international relations. She has undertaken research investigating humanitarian experiences of arms control and disarmament and is currently focused on investigating civilizational politics that address the problem of weapons. Her paper, “Practices of Legalization in Arms Control & Disarmament’ was published in Contemporary Security Policy and was nominated for the Bernard Brodie Prize 2012 for outstanding contribution in the field.