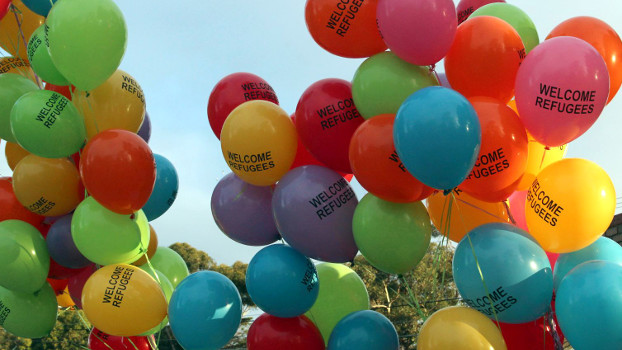 There’s no never-again ending to their stories of displacement: From Congo to Burundi, from Iraq to Syria, From Darfur to Tripoli to Tunis, to New Haven.  They’ve had to flee persecution on foot, by boat, by air, moving under duress with the traumas of forced migration.  They are walking with scars, and yet they are marching, in protest of yet more violence near their new homes in Connecticut.  The struggle for justice can be as hard as trying to march on crutches. But every hop-step we take with another is a movement towards solidarity.

Last spring, sitting beside an Afghani grandmother whose name means Moon in Farsi at the Criterion Cinema, I got a taste of the beloved community Martin Luther King, Jr. envisioned.  Moon and I were among a group of IRIS clients and volunteers who went to a screening of “Girl Rising,” a documentary film about nine young women who were deprived of a basic education in their home countries.  It was Moon’s first American movie. She only speaks a few words of English.  When the tub of butter popcorn came around to her, she took a handful and then dropped the kernels in the cone shape she’d made of the movie flyer, a small, make-shift tub of her own—I should say our own.  Every few minutes, she would look at me and smile, pushing the cone-tub of popcorn towards me, saying khosh, khosh. I was not hungry, but I took the popcorn. I don’t know a word of Farsi, but I could tell khosh, khosh, means something like “Take, Eat.”

The following week, Moon came to participate in a cooking group for refugee women to pool their culinary skills using Connecticut Food Bank Food to prepare a meal to share together.

The food-bank item most left behind in the IRIS pantry, the iron-chef secret ingredient of the week, was artichokes.  “Ard shawqy,” a woman I’ll call Zeinab said, Arabic for “thorn of the earth,” I recognized.  I’d never learned the word for artichoke before.  But I’d learned earth, and I’d learned thorn, from my Uncle Latif, my dad’s brother, who taught me how to speak Arabic.

“Ma feesh ard shawqy fiy Eritrea, mish kidda?”  (“There are no artichokes in Eritrea, right?) I asked a woman I’ll call Aamina, one of the few Eritrean refugees with whom I can communicate.  I don’t speak a word of Tigrinya, but Aamina speaks the Arabic dialect most familiar to me: She lived in Sudan for nine years, and Sudanese Arabic sounds much like the Upper Egyptian accent of my dad’s side of the family.

Talking to Aamina is like going back to a place where I was from, a home that never was my home, in a language foreign and yet strangely native to me.  Talking thorns of the earth with Aamina is an inkling of what I imagine speaking phrases in Tigrinya must be like for her.  Though my experience growing up with an Egyptian father in an affluent suburb of Birmingham, Alabama is not comparable to Aamina’s coming of age as a refugee in Sudan, our disparate stories converge in the guttural cadences, the slang phrases, of the dialect we half know by heart.

“Aiwa, bas fiyha fiy Malta,” she told me, they have [artichokes] in Malta. It was the artichokes that got Aamina telling her migration story.  She’d spent her first nine years in Eritrea, the next nine in Sudan.  Then, like many Eritrean refugees, she crossed the desert by jeep to get to Libya.  From Tripoli, she took a boat to Malta.

We took a walk with Zeinab through the irises, opening wider by the day, in the garden outside the church kitchen we use for cooking group.  I saw a loose, half-built, empty bird’s nest in the crook of the limbs of small dogwood tree, and I took a few pictures with my phone.  Zeinab looked up, to the place higher in the tree where the sound of a bird was coming from.  “We can hear her, but we cannot see her,” she said.

I remembered, from my days of learning Arabic with my Uncle Latif in Alexandria, the root word for bird, safara, means to travel, journey.  My father, aunts and uncles have all passed away.  That day, Aamina and Zeinab helped me remember them. That day, we had journeyed from thorns of the earth to house of the birds.

We could have sat out there under the dogwood trees all day, but we were called inside.  It was time to eat.  The feast had been laid out on the table: spinach-potato latkes, cabbage-apple slaw, a cake and muffins made of the canned carrots that always get left behind in the food pantry.

On her way up the stairs, to the kitchen, I heard Moon whispering with each and every step, gingerly, B’ism allah al-rahman, al-raheem, “in the name of God, the most merciful, the most compassionate” the beginning of every Muslim prayer.

While the women were serving themselves, one of my fellow volunteers was putting the muffins she’d baked in Zip-lock bags for the ladies to take home to their families.  She was cutting the cake she’d made with the same batter, saying “Here, we eat from the same cake.”

We didn’t know what to do with the fennel leaves, so Zeinab put them in a vase of water at the center of the table next to a white flower Moon had improvised out of paper towels.  Our grace that day was B’ismallah ya rahman ya raheem, Amen.

IRIS Community Liaison Ashley Makar shares stories about refugees in her presentations to congregations and community groups. This piece is an excerpt of a sermon entitled “Making the Shapes of Justice,” which was published in full on the website of the Unitarian Universalist Society of Hartford: http://www.ushartford.com/sermons.html.

Ashley Makar is a writer who works with refugees resettled to Connecticut. She does community outreach and grant writing for IRIS — Integrated Refugee & Immigrant Services. She’s currently writing essays about living as exuberantly as humanly possible with metastatic cancer. Ashley has published essays in the Birmingham Civil Rights Institute weblog The Struggle Continues, The Birmingham News, American Book Review, Tablet, Religion Dispatches, and Prison Legal News. She has a forthcoming e-book of essays called You Were Strangers: Travels through the Bible Belt and the Holy Land.