Last December, we visited the Turkish town of Reyhanli, close to the Syrian border, to volunteer at a local Syrian school for refugee children with the Karam Foundation’s Zeitouna programme. Many of the children had been displaced as a result of the Assad regime’s repression after an initially peaceful revolution. The escalation of violence meant many families had to seek refuge across the border in Turkey.

When you cross over into the Atmeh refugee camp just within the Syrian border you are crossing into another world. It is a world of mud and despair peppered with a few specks of hope. There is bitterness, and people quickly shout at us, telling us to stop taking pictures, to bring blankets and heating gas instead. We pick our way through what is the main thoroughfare, a thoroughfare that had only recently had members of ISIL driving up, who would surely have taken exception to expat Syrians wandering freely through the camp and mixing with the inhabitants. Atmeh had, on the day of our visit, about twenty five thousand cold, hungry and desperate souls encamped within its olive groves.

As we walked past a makeshift clinic we came across a long queue of children holding buckets. This was the central kitchen where food was prepared once a day with whatever food was in their stores. We were yelled at and told to wash our shoes with water. It wouldn’t do to bring the mud of the camp in there. An apologetic supervisor explained to us that it had taken a long time to try and bring up hygiene standards in the kitchen, and we watched as the cooks prepared a gruel of some sort in half a dozen large vats. The children were still jostling outside when we walked out, and a man who stood guard outside had to yell at them to stand back. The mud sucked gratefully at our shoes as we returned to its fold.

This was my first time back in Syria since before the revolution, even if I was only less than a hundred meters past the border. My two companions had been there six months before, but it had been easier then, before the Islamic State of Iraq and the Levant (ISIL) had started to overrun the border areas. The Atmeh crossing is an unofficial crossing where people can ferry back and forth using a rudimentary microbus system that seems to go through based on the whims of the commanding officer at the Turkish guard post.

In their last visit my companions had taken pictures of some of the children in what had been called the School of Return. The School had now been moved out of the tents where it was held previously into a rudimentary set of rooms that one could almost have mistaken for stables, were it not for the sign that declared it to be the School of Wisdom. Its central muddy courtyard sloped and lacked proper drainage. If rains fell the lower level, classes would flood. This was the harsh world that the children of the Atmeh camp had to endure. 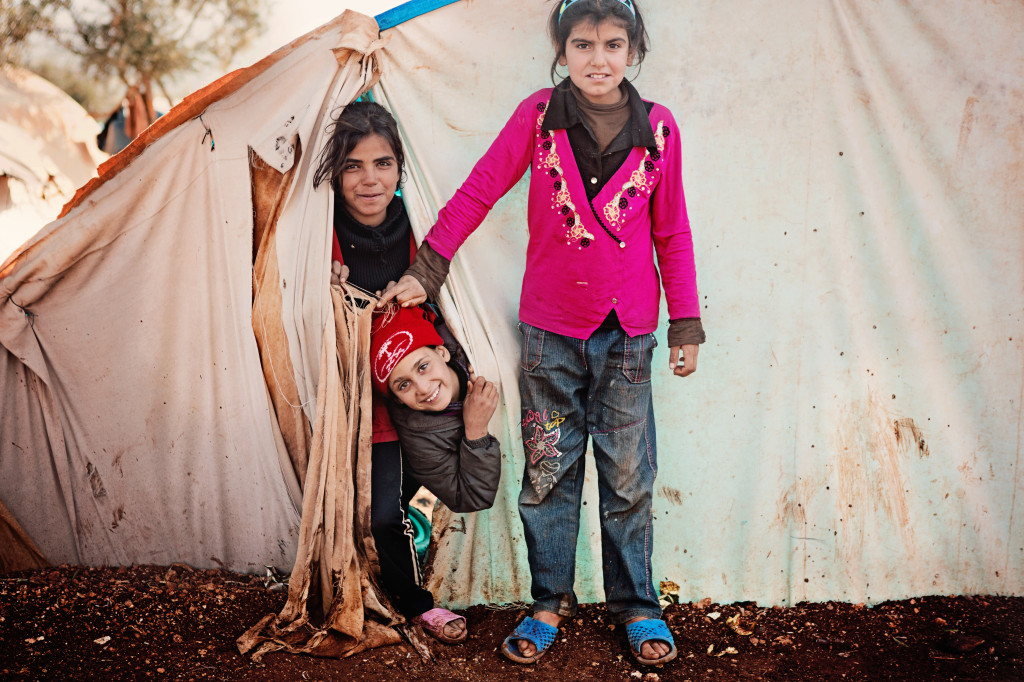 Remarkably, and in spite of the material hardships, life has found a way to carry on. There was a butcher, a green grocer, and a man who had opened a “supermarket” which consisted of a tent and a square cut in the side through which people can buy the merchandise on offer. There was a “fast food” shop proprietor selling soft drinks who had shrewdly invested in a bit of marketing by throwing a morsel of fat onto the hot coals. The sizzling sound and the smokey flavour of barbequed meat floated past us, giving a surreal impression of normalcy for what was anything but. In one small brick shop a barber busily plied his trade. Life also carried on for the children. On his previous visit, one of my companions had taken pictures of several children in the camp, and as he proceeded to take more pictures he was angrily rebuked, “No more pictures. We are tired of pictures. We are dying of the cold!” But thankfully these protests quickly died out as we were mobbed by the cries of children asking to be photographed. It was the simple, innocent curiosity of children who, in spite of spending over a year in such conditions, still felt it a novelty to have their picture taken. And my colleague had thought of that. Since his last visit he had printed out the pictures of dozens of the children he had met previously, and we walked around the camp seeking them out, asking our guides if they knew who such and such a person was. Often it was the groups of children themselves who would recognize their friends, and who would helpfully lead us to their parents’ tents.

When we arrived at the tents we were entreated to stay and join the tenants for tea, with many inhabitants even insisting that we join them for dinner or stay the night. We experienced a remarkable hospitality that stood in sharp contrast to the wretched conditions of the hosts. We politely declined and moved on after sipping our tea. During this visit, I saw a child with some kind of scarring over her nose. Surely, I thought, this isn’t the leishmaniasis I had read about? It was, and the girl I saw it on was one of the lucky children who was being treated. It’s worse the deeper you go inside, we were told. Deeper, I thought. It sounded like they were referring to some terrible and dark place, a jungle, or maybe something like in Conrad’s Heart of Darkness. And always there was the mention of ISIL, in hushed and fearful tones. In my mind’s eye I saw our little group being surprised by them, taken calmly somewhere and shot or perhaps beheaded. It gave the whole visit an underlying rawness and reality. It was only as we left the camp that I noted with some irony that fear of the regime was the last thing on anybody’s mind.

Earlier, as we had stood by the camp soup kitchen, I had noticed a pretty blonde girl with a pony talking and wearing a black baseball cap bearing an Islamic creed of faith, the Islamic Front’s logo, emblazoned on its front. We had also seen a jeep marked with the Islamic Front drive down the muddy thoroughfare as we entered the camp. The girl had been staring vacantly, her mind elsewhere, when she noticed me smiling at her. In an instant her face lit up in a toothy smile that melted my heart. My colleagues had been busy talking with children and asking about the pictures. Later I met her with her friends as they asked us who we were and where we had come from. They didn’t go to school, they told me, but intended to enroll in the “new school,” the School of Wisdom with the muddy courtyard and the classes that flooded when it rained. As we chatted a man drove up the thoroughfare with a pickup truck. He was selling lettuce and cried out, calling for people to buy. A gang of children had already gathered, and I watched silently as they picked the errant remnants of his produce. Sometimes they would pick it out of the mud and munch on it hungrily. There were no fat children in Atmeh.

When my colleague finally found a child or children he had photographed, all the other children would gather around, chattering away or squealing with excitement. “Is that what I look like?” asked one of the girls. It then struck us that even something as mundane as a mirror would probably be a luxury for most of the people in this camp. The young girl probably hadn’t even seen what she looks like since arriving. Perhaps that was a good thing, that they could not see the utter hopelessness of their situation. Their parents, however, saw it, and one man who was wondering what the fuss was about came over to see if we were distributing anything useful. He sucked through his teeth and nodded indifferently. “Pictures?” he said, and gave a look of disgust. “That’s no good to anybody.” But for the children it meant the world, specks of hope floating amidst the misery.

Maysaloon is a Syrian blogger and the creator of www.maysaloon.org, a site offering commentary on the Syrian revolution since 2011.