Walk in a straight line, don’t make any trouble, keep a low profile, maintain the status quo; all because change is unpredictable. Change is scary.

Until the Egyptian Revolution broke out in 2011, Egypt consisted of a state of cronies walking next to the wall. Stability was precious, even if it meant a stability defined by eating out of the garbage every day. People wanted to live their lives and secure retirement. And today, three years later, the old cronies want their stability back. They don’t trust a youth movement that wants change so radical that they would sacrifice their own lives for it. The old generation wants to decide on a future they will not live to see. And as they are heading to the polls they curse the young revolutionaries who made it possible for them to vote in the first place.

By the end of the May 2014, now-retired army leader Abdelfattah al-Sisi – the man who removed former Egyptian president Mohamed Morsi from office after massive protests brought Egypt to a standstill last year – is expected to win the presidency by a landslide so remarkable that the numbers would be reminiscent of Nasser’s 99% or Mubarak’s more conservative 97%. The only other candidate on the ballot is opposition leader Hamdeen Sabbahi, a lifelong thorn in the neck of previous regimes. The elections will strengthen his support base, but will do little harm to Sisi’s victory. The most prominent opposition figure, former head of the International Atomic Energy Agency (IAEA) Mohamed al-Baradei – who was among the first to call for a regime change – has long returned to exile in Austria after none of his advice in support of reconciliation was heeded.

In mid-May, I went to cast my vote for Egypt’s second presidential election in two years. It was a rainy day in New York, and a few dozen Muslim Brotherhood supporters had gathered in front of the Egyptian consulate to protest the “coup” that first wasn’t and is now in the process of becoming, as the man who deposed the previous president is poised to take his place.

As opposed to all previous elections, I have experienced this one without emotion. I was in and out of the consulate within minutes, casting my vote without the monitors checking if I was even registered. I wanted to evade the cheesy smiles and cringe-worthy happiness of Egyptian officials. Egypt is going through its sixth major election since 2011, and as always I was weary of the fruits it would bring. 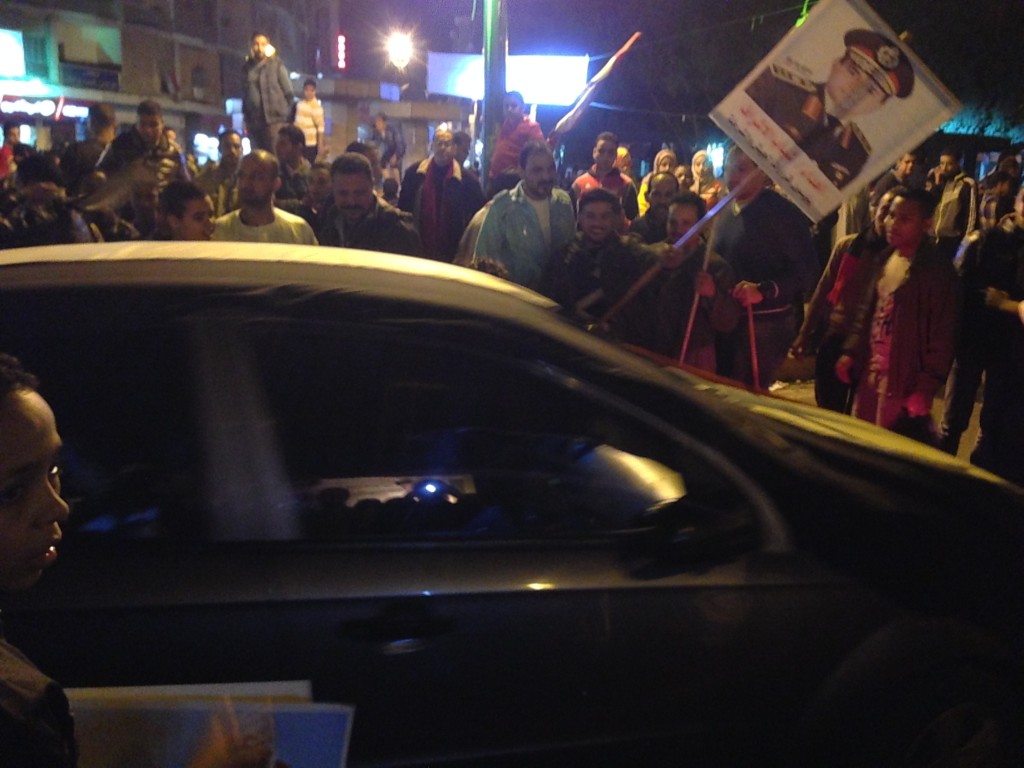 But something is different this time around. The liberal opposition yearning for a secular civilian president has learned its lesson and this time rallied around one candidate. This is in stark contrast to the 2012 election, during which there were nine other candidates for liberals to choose from, resulting in a split vote (echoing the Bush-Gore-Nader conundrum). This ultimately brought Morsi to power. But even this realization has come too late: because the immediate needs of the poor were neglected during three years of ideological head-banging, the majority of Egyptians don’t see the revolution as having had a positive impact on their lives. A longing for the days of Mubarak’s “stability” permeates public life.

They just want their “stability” back, a stability stemming from a state in perpetual inertia, as was the case during three decades of economic and political stalemate under Mubarak.

Alone in the voting booth for a moment, my mind began to drift. For a second, I contemplated ticking the box next to Sisi’s picture. I was angry. I felt like punishing everyone for not standing their ground, for giving up on a revolution that was so exemplary it will be remembered for centuries to come. But I am as guilty as everyone else. What have I contributed to stop another military state from coming into effect?

I remembered a night I spent in the southern province of Qena earlier this year. It was the third anniversary of the revolution. Thousands on the street were celebrating not the revolution, but Sisi and the army. People were celebrating the return of a military state on the anniversary of their revolt against a military state. I couldn’t hold back my tears in the face of the absurdity. A man tapped me on the shoulder, saying “Don’t worry, Sisi will crush the Brotherhood.”

During the first days of the revolution against Mubarak, euphoria ran high and optimism was everywhere. It was a brave new world, everything was possible.

But things have changed. I stopped talking about politics with people. I’m tired of listening to endless rants about “terrorism” and witnessing the creation of a new pharaoh to revere. The majority wants the return of the “Iron Fist,” as long as its fangs don’t reach them. They will “keep walking next to the wall” as they try to convince others that criminals have to be dealt with without the due process of law. But the fact remains: every time a weapon has been held to my face in the past years, it was by the police.

Fascism is the virtue of the impatient. A problem as huge as extremism cannot be dealt with in a “scorched earth” manner. Case in point: Rwanda is in the process of becoming a regional political power because their reconciliation efforts made it possible to seek forgiveness and move forward, whereas a bomb-flattened Afghanistan only created a new generation of terrorists. Egypt has turned very swiftly from religious fascism under Morsi to elitist fascism after his downfall. Liberal media and news outlets that were once the voices of reason have turned into mouthpieces for the military and police state, justifying and protecting their actions of cracking down on free speech. Sisi does not need to spend time or resources campaigning; he is receiving the publicity for free. A four-hour taped interview with prepared yet vague answers did not weaken his credibility. His refusal to meet his opponent Sabbahi in a live debate – likely knowing his own sweet yet hollow talk about patriotism would not have endured against a man capable of answering complex questions – did not do anything to quell the support. Sisi is young, charismatic, soft-spoken, and knows how to induce emotions among all social classes. He adeptly leverages his standing as the hero who saved Egypt from the Muslim Brotherhood and its disastrous fiasco of a presidency – an action that made the masses feel indebted to him.

The former general might indeed bring progress to Egypt. His ascent has certainly been paved by the support of the people, the government and the media. But at what cost? He is not a statesman of international standard, he has an uneven understanding of democracy, and his bloody cleanup of Brotherhood protests at Rabaa Mosque taints his record before even taking office. If I were to judge him on merit, he has not made Egypt a safer place. If I were to judge him on principle, he promised a civilian Egypt and is about to deliver a military one.

As I left the consulate I once again looked across the street, where Brotherhood supporters were still standing in the rain. I wanted to tell them something, but the past years had robbed me of the energy for political conversation. It has become almost impossible to change anyone’s mind or engage in productive dialogue. Should I hold up the four-finger “Rabaa” sign to show that despite my contempt for their party, ideology, political practices and leadership I am against the massacre of a thousand civilians by the state? Or should I gesture a CC (“Sisi”) sign to rub in their faces that they had played their cards wrong since taking power? I did neither.

In Sherif Arafa’s 1993 film “Terrorism and Kebab”, a down-and-out Egyptian laments the state of the nation: “Anything that happens is a blessing. It doesn’t matter if it’s good or bad. The catastrophe is that nothing is happening.”

I thought about this as I left the consulate, walking briskly next to the wall.

Abu Bakr Shawky (www.abubakrshawky.com) is an Egyptian-Austrian filmmaker born in Cairo in 1985. He graduated from the Cairo Cinema Institute and the American University in Cairo in 2010. His documentaries “The Colony”, “Martyr Friday” and “Things I Heard on Wednesdays” have been awarded at festivals worldwide. In 2009, he documented Tokyo’s generational gap in “Chu-gi”, produced by The Japan Foundation. In 2010, he directed “The Road to Atalia” for the International Organization of Migration, examining the issue of illegal immigration from Egypt to Italy.