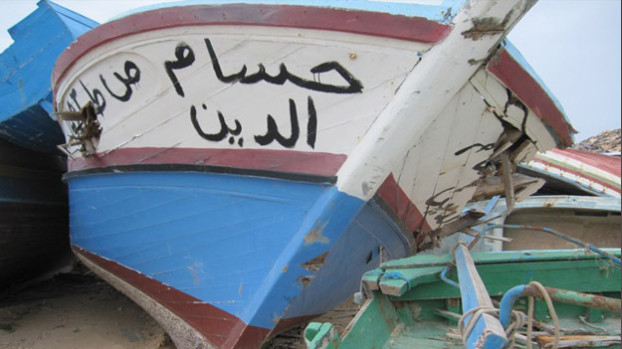 Why should we care now? Now that it makes American news? Now that it’s translated into English?

Another tragedy in Lampedusa. The week before, one in Scicli: 13 migrants died while beachgoers saved the rest.[1] But this isn’t new. Not for Lampedusa. Not for those whose lives have been touched by all the migrants who have landed, been rescued, brought to Lampedusa. And returned to Lampedusa.

Outrage. I wake up to too many notifications on Facebook. Something has happened. Even my American friends are sending me links. And yet this is not something new. Migrants have been landing on and been rescued from Lampedusa since the 1990s. They’ve been dying trying to reach land since then.

This is about rescue—or, more precisely, a failure to rescue. They were so close. They are not clandestini, they are human beings. They are women, men, children.  They are not seeking to “evade capture.” There are no smugglers on board, no scafisti. They are a group of migrants—Eritrean refugees[2]—thrown together, given no supplies, and told to go a certain direction by Libyan human smugglers. Smugglers who stayed behind to count their money and plan more trips. Smugglers migrants are forced to use because there is no other way to get to the EU and ask for asylum.[3]

They saw people. Did they see land? They wanted someone to come rescue them. Others have been rescued over 70 miles from Lampedusa. They were so close–about a mile away. An idea to set fire to draw attention, to be saved. Because they likely knew the stories. Told by migrants who have already crossed. Boats that have been ignored by NATO, ignored by fishing boats. Ignored by states fighting over who “should” take in these migrants. All while boats drift, without supplies, without help.

Fear strikes, the petrol catches fire. The migrants move to one side and the boat capsizes. Fishermen and Italians on vacation are their first responders in the early dawn,[4] followed soon after by the Coast Guard.

The mayor of Lampedusa declared an island-wide day of mourning. Lutto comunale. Pro-immigrant parliamentarians called for a national day of mourning. Soon it became a lutto nazionale. The Prime Minister, Enrico Letta, declared that those men, women, and children who died were now Italian citizens. Dying close to Italy, in large number, confers citizenship. Does that citizenship comfort the families who have lost loved ones?

After Letta’s visit to Lampedusa, he calls for state funerals for those who died that day.[5] But when? The caskets sat  in the airport hangar while doctors noted the sanitary issues and the government still didn’t set a date.[6] Then, suddenly, the caskets are moved and buried.[7] No state funeral. No local, Lampedusa funeral. The state took away the caskets, took away the chance for mourning by family members.[8] It took away the chance for identification by more than a number. Instead the remains are scattered around Sicily: two in Mazzarino, in Delia, some in Mussomeli. Many without a funeral. Some with prayers at the graveside. Sciacca plans to bury ten with both Catholic and Muslim rites.[9] And the families? Those looking for their loved ones? Forgotten. Political promises made to be broken. Migrants, their plight briefly highlighted, are quickly forgotten. Lampedusa, the island thrust back into the limelight, is also quickly forgotten.

Why Lampedusa? Because everyone likes to use Lampedusa. The politicians fighting for power, fighting for resources and money that never trickles down to the island. The few local residents who resent the migrants for decreasing tourism. Academics who look at one place, at one island, and ignore the complex picture of rescue, reception, detention, and repatriation in Italy. The detention center directors who make thousands of Euros “welcoming” migrants. Migrants who sleep on foam mattresses.[10] Outside. In the rain. Because transfers are not happening and the center is overcapacity. As usual.

Lampedusa is sexy. It’s where the UN brings Angelina Jolie for a visit. It’s so beautiful and iconic–the first bit of EU land migrants often see. So geographically tragic and strategic: closer to Tunisia than to Sicily or mainland Italy. What happens when we only look at migrants processed through Lampedusa?  We forget about all those who must hide in cargo ships and trucks, who lose their lives crossing from Greece and Turkey through the Adriatic. We forget the landings and rescues that happen on Sicilia’s shores, Sardegna’s shores.

But most importantly, we forget the people. Another big shipwreck. It’s become too common now. There was the May 8th, 2011 one that sparked Jolie’s and the UNHCR’s Guterres’ visit.[11] The one early in June 2013 that sparked the Pope’s visit to the island[12] –a visit that began to change the conversation about migration and responsibility. A visit that received little to no coverage in the U.S. We forget the bodies that regularly wash up on shore, are caught in fishermen’s nets. The bodies buried in Lampedusa’s tiny cemetery. The bodies that are found so often, they must be scattered. Sent to other cemeteries in small Sicilian towns that have space.

And now the October 3rd shipwreck. Too many bodies. Too many people that could not be saved. 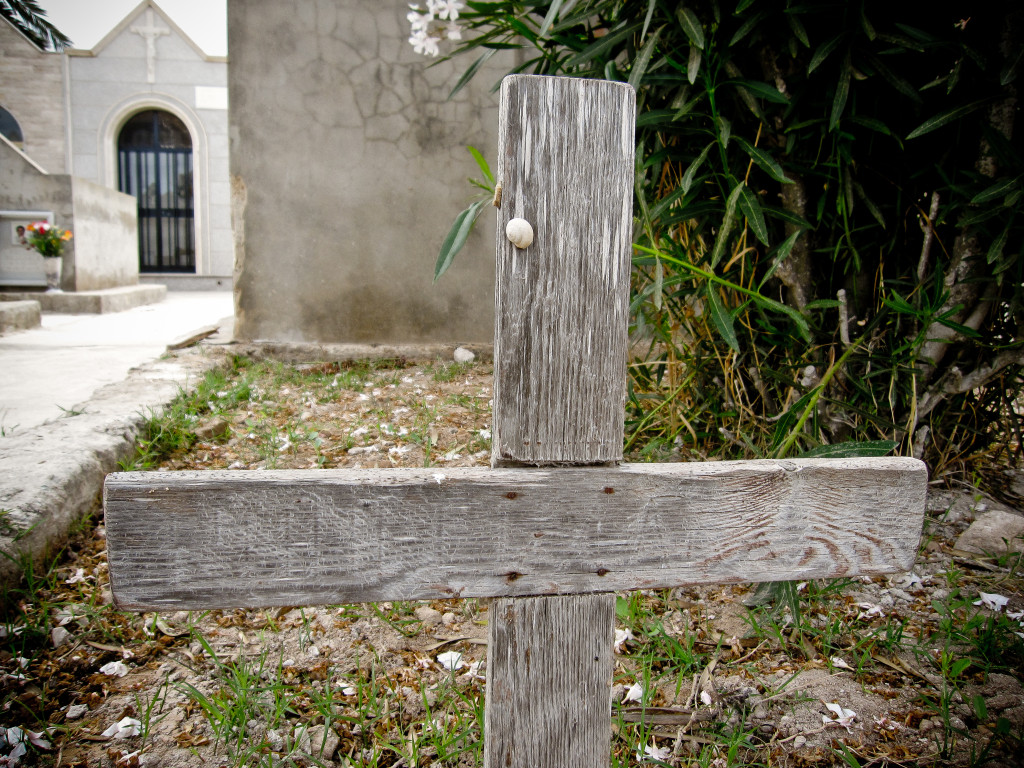 Photos of young men, survivors, peeking under the gold emergency blankets used during migrant landings that have become temporary shrouds and body bags, looking for someone. Small, white caskets. Children, including a newborn still attached to its mother, who could not be saved. L’hanger della morte. The survivors visit, sobbing, praying, crying. The caskets increase as the sub-aqueous teams return with more and more bodies. Three hundred and eleven at last count.[13] And fifty still missing.[14]

One tragedy makes world news every so often, while the daily tragedies of migrants—their passages, the boats that sink without witness, those that drown before rescue, those who sleep outside in many centers, tendopoli, camps…waiting, waiting, waiting…to be transferred, somewhere; those who get their documents and still live on the streets, in temporary shelters, those who confront racism every day, those who suffer violence in detention centers and elsewhere, those who bear children that will never be Italian citizens—are forgotten. Over 20,000 deaths counted since 1988 in the Mediterranean.[15] And those uncounted?

Activists hope this new tragedy, because of its sheer volume, will finally be the straw that breaks the camel’s back. They hope it will finally be what will make the uninterested—politicians and citizens alike—care. Images of Lampedusa’s dead are flanked with photos of Italian emigrants to the United States in the 1900s that drowned en route.[16] The photographs scream: please, care. One day, not too long ago, it was you. It was you, the Italians. It was your grandparents and great-grandparents and cousins who were unwanted, who died along the way.

Letta visits Lampedusa and the caskets whose number grows daily. Yet the Italian state’s responsibility and complicity with this and other disasters is deferred. This is an “EU problem” too, he says.[17] Should the Bossi-Fini law,[18] which criminalized migrants and refugees, be overturned? Angelino Alfano, Minister of the Interior, says this is not the solution.[19] But he does recommend the Nobel for Lampedusa.[20] Letta says he was ashamed that those who survived this shipwreck were registered, per Bossi-Fini, as clandestini, and thus the government should discuss the matter. All talk, all theory, and no action. The continued work of border policing overshadows that of the Coast Guard’s many rescue operations.[21]

But which Lampedusa? The one that protested migrant arrivals because they feared tourism profits would decline? The one that blocked the port so that migrants were forced to wait for medical attention and care for hours, migrants whose boat was unfit to be towed to Lampedusa and had to be transferred via Coast Guard vessels? The one whose detention center does the “best it can” while pocketing state money and leaving migrants to sleep outside? Or the Lampedusa of fishermen who rescue or alert authorities to migrant boats in distress? Of activists who wake up to a boat landing outside their window and invite migrants into their home for shelter? Of young activists who want to fight against those who wish to forget the migrants and start a migration museum on the island with boats and items migrants leave behind? Of the new mayor who cares for the plight of these migrants, who fights for them, who calls on the president to mourn these deaths? The Lampedusa of the priest, Catholic community, and locals who cooked food for the 6,000 who lived on the Collina della Vergogna, the Hill of Shame, after the Arab Spring, because the detention center couldn’t, or wouldn’t, because the state ignored them?

With the help of MeltingPot.org, an organization that has documented migrant experiences and abuses and fought in the courts for migrant rights in the Mediterranean since 1996, some locals have started a different petition. They have been echoing what activists have been demanding for years– open a true humanitarian corridor. Migrants are leaving all parts of Africa and the Middle East, many travel through Libya and are tortured, killed, and kept in jails for years.[24] The migrants travel by rickety old boats fishermen no longer consider seaworthy because that is their only option. They flee war, dictators, persecution, poverty. And they are at the mercy of smugglers–smugglers in the Sinai desert who extort their family members, or kill them. [25]So once they make it to the water, the worst should be over.

And yet, this petition only garnered 7,000 signatures a few days after the shipwreck.[26] Because it’s easy to say, “Look at the brave [people] on that small island that saved some drowning migrants. Peace Prize! Recognize us. Recognize the sacrifice Lampedusa as an island has made.” It is harder to say, “We want no recognition.” We want you to focus not on Lampedusa, but on the migrants.

The individuals from MeltingPot.org, those who have signed the new petition, and those activists who have for years cried out for a real humanitarian corridor—real concern—for migrants don’t want or need a prize. They don’t want or need the focus to be on them or on Lampedusa. The focus should be on the migrants–those who came before and made it, only to be beaten down by a legal system (Italian and EU) that gives them no rights, no support,[30] no citizenship. On those who died trying to cross and whose bodies were found. On those who died and whose bodies lie at the bottom of the Mediterranean. And on all those migrants trapped in Libya– trapped under the control of smugglers and traffickers en route between their hometown and the EU. And especially, to all those migrants traveling right now, be it on foot or by boat, through the desert, or across the sea.

Let’s put the focus on them, because this should not happen again. Because a true humanitarian corridor would value migrant lives– above politics, above economics, above tourism. As Pope Francis said when he visited Lampedusa in July 2013, we must fight against the globalization of indifference and against state practices that do not value the humanity of all.[31] We must fight for these migrants.

So let’s remember Lampedusa not for one instant, one tragedy, but for what it represents:—a small stop; part of a long journey of struggle. And let’s honor the memories of these most recent victims of inhumane state practices by remembering all who have lost their lives in the crossing, in the desert, in the Libyan jail cell, in the Italian detention centers, on the Italian streets. Let’s pursue concrete action to provide those seeking refuge a safe way to enter Europe.

Tina Catania is a doctoral candidate in the Department of Geography at Syracuse University. She holds a BA in Geography from Dartmouth College. Her work centers on Corporeal Geographies, Racial Identities, Gender, Latinos and Immigration, Refugee/Asylum and Italian Detention.

Filed under: All ArticlesImmigrationLampedusa: "Carrying Weight of the World’s Indifference"