The ‘reflexive turn’ in anthropology, marked by the publication of Writing Culture (Clifford and Marcus) in 1986, raised fundamental issues of representation, epistemological authority, and Eurocentric colonialism in anthropological texts. In this crucial moment, the traditionally assumed value hierarchy between ethnographic fieldwork and anthropological theorization of such fieldwork was also challenged. The so-called objective, scientific theory of humanity no longer held unquestioned authority, while previously marginalized ‘personal’ or ‘fictitious’ accounts of society and culture—memoirs, journals, and fictions—combined with theory have become explored as alternative ways of ethnographic writing. This growing body of literature, sometimes referred as fictocriticism, challenges the myth of faithful cultural representation through performative modes of writing as a means of doing theory. The Centipedes follows this legacy of the ‘reflexive turn,’ concerning the assumptions embedded in cultural ‘translation’ in ethnographic writing, namely, culture as a text and translation as a transparent process executed by the ethnographer.

This project is also about reimagining marginalized beings, social positions, and places as ‘liminal spaces’ that are in constant processes of cultural translation, or ‘moving across.’ Starting from Victor Turner’s (1967) concept of liminality as an “interstructural situation” in a society of “structure of positions” (93), we approach liminal beings and places not as in a ‘passage’ that leads to more stable structural positions, as in rites de passage, but as contingent spaces that appear, disappear, reappear, and travel around between cracks of structures, resisting any concrete definitions or developmental progress.

The Centipedes consists of nine short stories initially written in Korean by Woo, Yun Jin alluding to folk tales and current social issues in South Korea, which were then translated to English by Mathew Bumbalough, a self-taught translator who lived in South Korea for six years working for the US Army and Seoul Metropolitan Office of Education. Each story was written either from the perspective of a marginalized entity (e.g. a parasite, pet, bug, elder, widow, and the deceased) or in relation to a peripheralized place (e.g. an old rental house, outskirts of a large city, and internal spaces of human and non-human bodies). These stories are connected to each other by some mention of centipedes, alluding to Korean folk tales where centipedes having the ability to transform their appearances at will. Because of this, these narratives could be read as an entity reappearing in different bodies or shapes. The following text shows the translation process of Specimen, one of the nine stories, from Korean to English with words in red indicating how changes were made.

Among other liminal entities in this project, we draw specific attention to the role of the translator as an ethnographer, or a cultural mediator. Ritva Leppihalme (1997) takes note of the discourse on how translators are often culturally marginalized as producers of mere copies of original texts in their traditionally “invisible” roles (18). Ironically, however, through this ‘translation’ project, it became clear that culture is not something that can be stabilized as “text” to be “read” and “moved across” into another language without any changes of its “original” meaning. The very act of textualization and translation of languages turned out to be already entangled with the complex processes of culturally interpretative decision-making. Culture turned out to be segments of lived experiences and relations that do not compose a coherent whole but resonate and overlap in a multitude of layers. “Moving” something, whether text or culture, from one place “across” to another proved to be a social performance of bringing attention to particular interpretations since the movement is always an embodied experience. 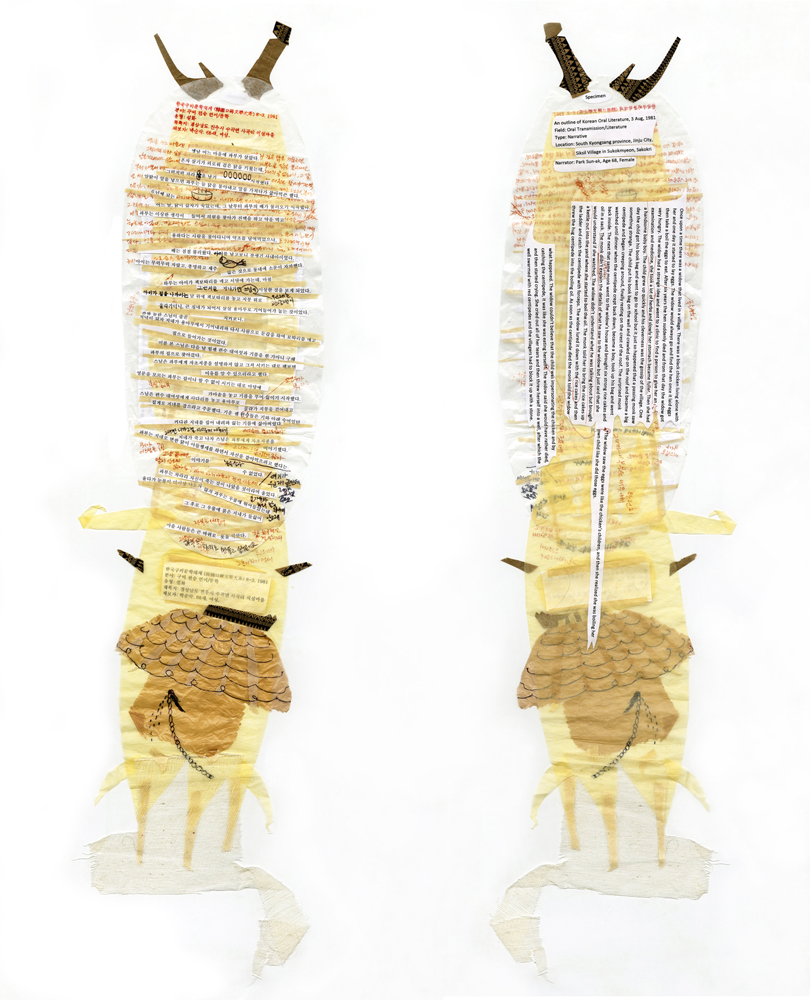 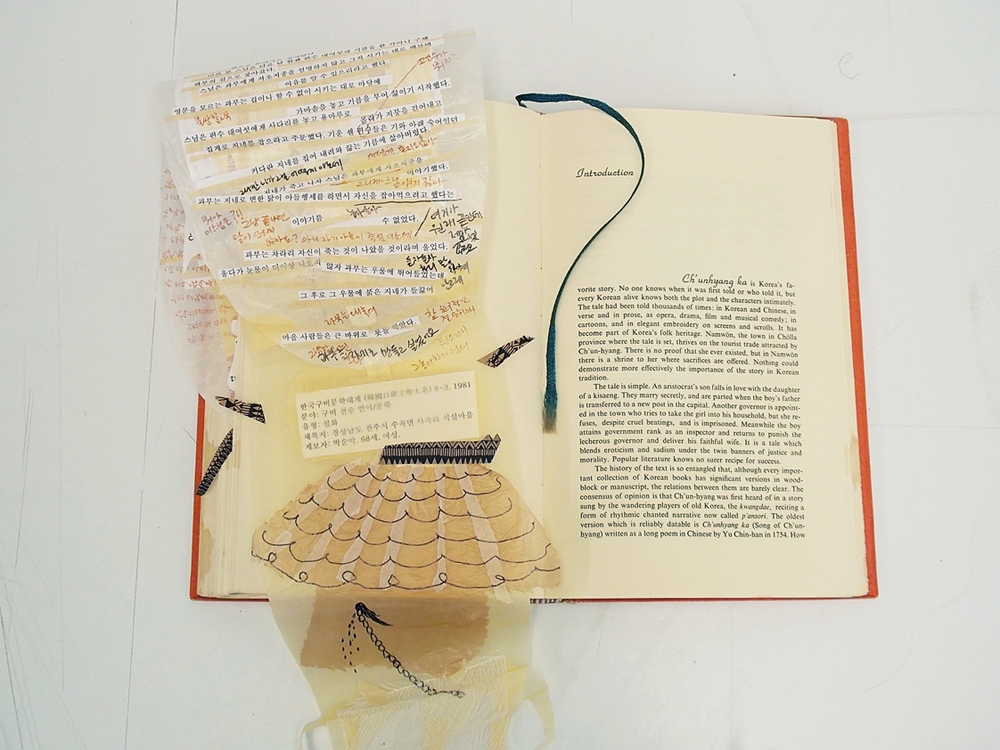 After these translation processes, the stories were “translated” again to paper collages by Woo in collaboration with Bumbalough as an attempt to find a way to perform this ethnography more affectively (see figures 1 and 2). These collages were then remade into a large number of small prints by Woo, which were inserted into library books in and outside of Bloomington, IN USA (see figure 3). By inserting the unendorsed narratives into places where official records of history and culture are archived, The Centipede seeks to become ‘liminal spaces’ in which unheard narratives and unspoken feelings reside, breed, and leak out to the sanitized surface of the everyday. By borrowing others’ territories of knowledge and narratives, these strange intruders may disturb the spatial order of knowledge from within it. 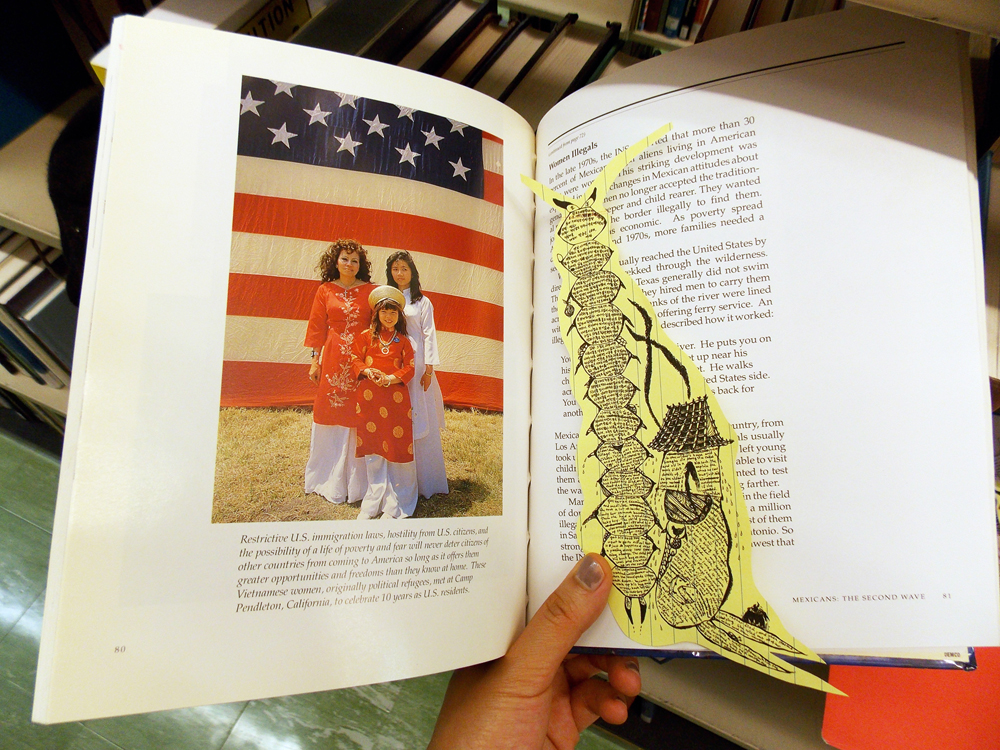 In order to produce a large number of “centipedes,” the collages were remade into small prints and inserted into library books on relevant subjects like immigration and foreign policies. Total five stories of the nine were remade into prints with several different kinds of paper. The Herman B. Wells Library, Indiana University Bloomington. 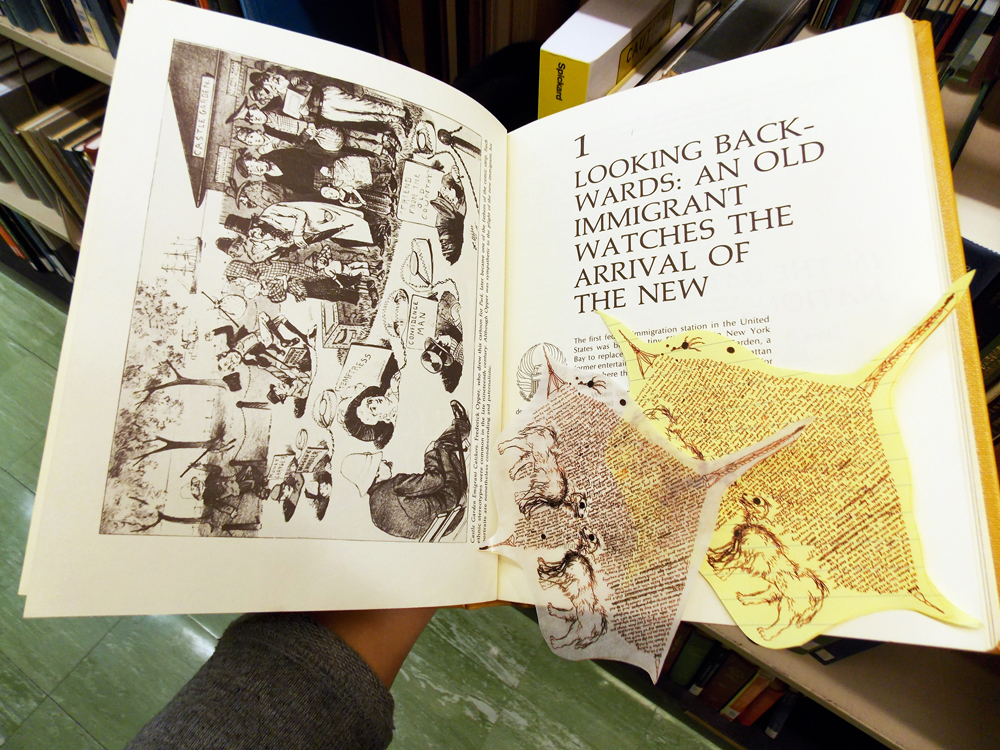 Five stories of the total nine were remade into prints with several different kinds of paper. Books were chosen based on the relevancy of their subject matters to each story. The Herman B. Wells Library, Indiana University Bloomington.

My body is not mine. I listen to the sound of floating strangers who make up my body. They move around in a system, and jump from body to body in their invisible trajectories. They are bacteria, fungus, viruses, and parasites that connect bits of me to bits of you. In their world, nothing is alone. Everything is connected. We overlap. My art lives like these secrete intruders. I reappropriate public spaces and systems in order to produce and circulate my work, similar to how viral or parasitic vectors borrow their hosts’ metabolism or biological cycles. Rather than producing more, I choose to re-produce or ‘para-produce,’ altering existing relations of matter and perception. As floating strangers in a system, my artworks appear, disappear, and reappear through others’ discoveries and involvements.

Woo, Yun Jin is a street artist, visual ethnographer, and curator. Woo holds an MFA in Sculpture from Seoul National University and is currently a PhD student in Communication and Culture at Indiana University, Bloomington. She is interested in public interventions that employ parasitism or virality as resistant tactics. Her performance and “parasitic” practices have been hijacking various systems and modes of conduct in South Korea, China, the United States, and Germany. She recently curated Para-Sites 2014 Distributed Exhibition Project—an international network of artists intervening public spaces in Australia, France, Ireland, Italy, Jamaica, New Zealand, South Korea, the United States, and the World Wide Web. Her paper discussing this project as a case study of digitally curating public interventions will be presented at the 103rd CAA Annual Conference in 2015. A selection of her works can be accessed here.

Mathew Bumbalough is a PhD Student in Literacy, Culture, and Language Education at Indiana University. He formerly served as a Korean translator/interpreter for the US Army, an English language program coordinator for the Seoul Metropolitan government, and an English teacher in Japan. He is currently working as an Associate Instructor at IU researching World Englishes, language education, and cross-cultural communication.