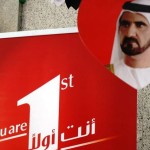 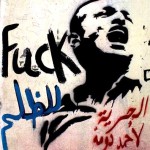 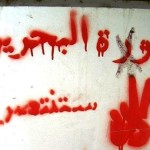 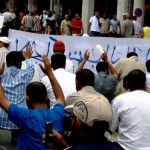 Pro-reform demonstrators congregate in Morocco’s capital city, raising their hands to the sky in a gesture meant to underscore the peaceful nature of democratization protests. — April 2011; Rabat, Morocco 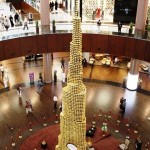 The monumental Burj Khalifa tower, emblematic of the Dubai skyline and the UAE more broadly, has been commodified as a symbol of Emirati modernity and economic achievement. In a surreal gesture, Dubai mall featured a three-story replica of the towering structure—formed entirely from Ferrero Rocher chocolates. — December 2012; Dubai, United Arab Emirates 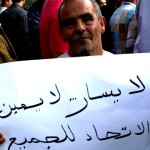 As part of a massive pro-labor demonstration celebrated on May Day, thousands of Tunisians flooded Habib Bourguiba avenue, underscoring the need for post revolutionary unity. This man’s sign reads: “No left, no right – unity for all.” — May 2012; Tunis, Tunisia 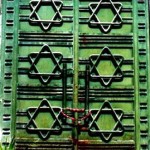 Shuttered windows on a synagogue featuring the Star of David (read also as the “Seal of Solomon” in Islamic traditions), in the downtown heart of the Tunisian capital. — June 2012; Tunis, Tunisia

These photographs arose out of a long-standing interest in the modes of authority—religious, economic, political and cultural—in visual culture across the world. This set of images, dated between 2010 and 2012, was taken during field research throughout North Africa and the Middle East, in my capacity as a regional analyst, artist, photojournalist and academic. In each of these fields, my work explores the performance of political legitimacy and contestation in a variety of media—aiming to illuminate the processes by which individual actors play on sensory affect to articulate visions of idealized future(s) through reference to localized inheritance of the past(s).

Amanda E. Rogers is currently an Andrew Mellon post-doctoral fellow at the Institute for Research in the Humanities (University of Wisconsin-Madison). She received her PhD from Emory University in 2013, and is the author of a forthcoming book entitled:Semiotics of Rebellion from Morocco to Egypt: Iconologies of Political Dissent and Governmental Legitimacy in Regimes of Affect. Her research is informed by nearly ten years of teaching and research across Morocco, Algeria, Tunisia, Turkey, the United Arab Emirates, Libya, France, Spain and Egypt, and has been funded, in part, by the Jacob K. Javits Foundation, Fulbright IIE, the Council of American Overseas Research Centers, the American Institute for Yemeni Studies, Fulbright-Hays and the American Institute for Maghrib Studies. In addition to academic publication, her work as a photo-journalist and regional analyst has appeared on the Muftah.Org, Aslan Media Initiatives, Kifah Libya, the BBC, Al-Jazeera and the Front Line Club.