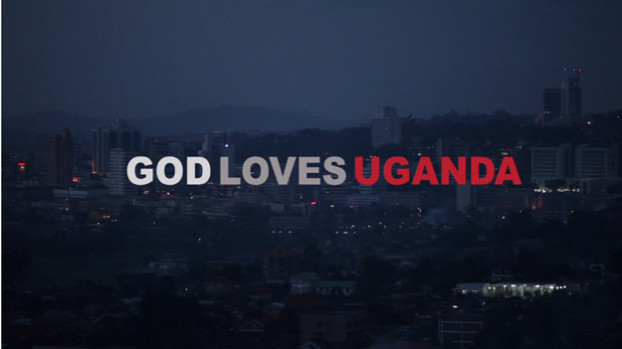 In his new documentary, God Loves Uganda (2013), director Rodger Ross Williams trains a sharply focused lens on the Evangelical missionaries travelling from Missouri to “The Pearl of Africa” to spread a deeply conservative reading of the Gospel. Splitting scenes between the U.S. and Uganda, Williams presents a convincing polemic: U.S.-backed campaigns for “sexual morality” are directly responsible for soaring HIV infection rates and rapidly growing anti-homosexual sentiment in one of the world’s poorest nations.

Carefully structured and well edited, God Loves Uganda is also timely. The film tackles the topical issue of gay rights in Uganda and amplifies long-standing critiques of conservative Christian organizations’ approaches to HIV prevention, which emphasize abstinence and monogamy over condom-use. The film has been praised on the festival circuit and a nationwide release is forthcoming.

While God Loves Uganda raises pertinent questions, it frequently offers reductive and shortsighted answers. By depicting Ugandans as easily led and oversimplifying the impact of colonial, neocolonial and neoliberal interventions on Ugandan society, Williams betrays an imperial gaze that echoes the perspectives he seeks to critique. A more discerning analysis is needed, if audiences are to understand longstanding debates over sexuality in Uganda.

God Loves Uganda posits that, following the despotic rule of Idi Amin (1971-1979), outside aid was needed to reconstruct an ailing nation. Throughout the 1980s and 1990s, USAID-funded initiates, such as the establishment of the Uganda AIDS Commission (UAC) and a National AIDS Control Program (ACP), helped alleviate the AIDS pandemic. When President George W. Bush came to power, however, emphasis shifted from safe-sex education to pro-abstinence campaigns administered by conservative Christian organizations. Consequently, HIV infection rates spiked dramatically. Now, Evangelical groups exploit access to rural communities and senior politicians to promote homophobic views that, they hope, will be encoded into law. Violent physical attacks of openly or ostensibly lesbian, gay, bisexual and trans* people are commonplace[1].

With this scene set, action shifts to Kansas City’s International House of Prayer (IHOP) where earnest young missionaries prepare to travel to Uganda. IHOP leader Lou Engle sees Uganda, where over half of the population is aged under fifteen, as ripe for saving from the kind of sexual immorality that besmirches the U.S.A. As schoolchildren file into an IHOP missionary school assembly hall, the Church’s pervasive influence is made clear.

MP David Bahati introduced the 2009 “Anti-Homosexuality Bill” to the Ugandan Parliament, recommending the death penalty for the so-called offence of “aggravated homosexuality.” According to Bahati, U.S. Evangelical society, The Fellowship (also known as The Family), inspired the Bill, which is still pending review.

Preaching to the converted

The thesis set forth in God Loves Uganda is straightforward and coherent. It is also easily digestible for Western audiences appalled by the infamous “Kill the Gays Bill,” and keen to understand it roots. Conservative Evangelists have undoubtedly fuelled homophobia and backed dangerously counterproductive AIDS policies. Their influence on social opinion is overemphasized here, however, at the expense of nuanced analysis and an important history lesson.

Catholic and Protestant missionaries were proselytizing “sexual morality” in the region even prior to the existence of The British Protectorate of Uganda. After drawing borders and installing themselves as rulers, colonial administrators enforced public decency and anti-sodomy laws, explicitly aiming to correct the immoral sexuality of savage natives[2]. Much of this legislation remains in place, but the British colonial origins of Uganda’s anti-homosexuality laws are largely overlooked here. More pressingly, the film fails to explore how imperial impositions have evolved and been incorporated into modern Ugandan culture and society.

Over seventy percent of the country’s population considers themselves Catholic or Anglican. Both denominations doctrinally regard homosexuality and extra-marital sex as sinful. It is important to note that adherents see these religious institutions, regardless of their origins, as wholly Ugandan. Church of Uganda literature is explicit on this point[3]. The CoU is a powerful entity within and beyond national borders. In the global Anglican Communion, its bishops vocally oppose member churches ordaining homosexual priests or blessing same-sex marriages (Hassett 2007; Ward 2002).

Oppression of sexual freedoms is not new to Uganda. Sex and sexuality are however hotly debated topics, even among African Christian theologians. These scholars present diverse views on AIDS/HIV policies and, albeit to a lesser extent, homosexuality (van Klinken and Gunda 2012). African women theologians in particular are building on their critiques of patriarchy to tentatively contest homophobic attitudes[4].

Such culturally grounded perspectives would have added depth to God Loves Uganda. Williams instead opts for polemics. Consequently, his film reiterates a familiar, and frustratingly circular debate over the supposed “Africanness” of homosexuality: Ssempa claims depraved, Western homosexuals are recruiting and corrupting Ugandans; Kaoma dismisses Ssempa as brainwashed, claiming his homophobic views are “not Ugandan.” Yet, as Cameroonian activist John Nana notes (quoted in Gevisser 2013), the same accusation can be leveled at the U.S.-based Kaoma.

On both sides of the debate, activists evoke an imaginary, homogenous and essentialized  “Africanness” in their arguments. These constructions, popular across the continent, rely on competing but equally selective readings of history (Msibi 2011; Stychin 2001). Dispute over the alleged (un)Africanness of homosexuality—and likewise Christianity, conservatism or liberalism—stymie considered analysis of a complex and urgent issue.

Williams plans to tour the film across Africa, and “start the conversation.” The conversation is however already well underway. In the form of a tautological exchange, it will continue to go nowhere fast.

The cronyism and increasingly dictatorial behavior of incumbent Ugandan President Yoweri Museveni (1986-present) have caused widespread suffering in Uganda (HRW 2012; Tangri and Mwenda 2013). Yet God Loves Uganda uncritically reiterates the position, popular in the West, that Museveni is praise-worthy for steering social and economic development during the 1980s and 1990s (Hogle et al. 2002). Neoliberal structural adjustment programs introduced by the World Bank and International Monetary Fund and embraced by Museveni may have boosted Uganda’s GDP, but employment, real wages, and access to health services and education fell drastically into the 1990s.

By the 2000s, the Bush administration was hailing Museveni as a U.S. ally in the War on Terror and supporting his regime through financial and military aid. President Barak Obama has followed suit, overlooking evidence that the aid fuels political oppressions and human rights abuses (HRW 2012; Tangri and Mwenda 2005). Williams asserts that Evangelicals’ popularity is predicated on Ugandans’ poverty and desperation but does not assess the roots of their condition. He blames U.S. churches for driving crises in Uganda, but lets U.S. politicians off the hook.

Viewers only glimpse possible broader critiques. In one powerful sequence, a Pastor behooves his Kampalan congregation to fund God’s work. They duly oblige, emptying pockets into collection plates. In the next scene, maids serve fine food to the Pastor’s family, in a lavish, gated community home. For a tantalizing moment, Williams seems to imply that the demonization of homosexuals, a soft-target minority community, is financially and politically rewarding. Ugandan scholar Thabo Msibi (2011) argues this point explicitly, noting that hatred towards homosexuals shores up patriarchy and distracts attention from pervasive structural inequalities.

Analysis such as Msibi’s would usefully extend the film’s central critique of conservative Evangelicalism in general. A similar sequence could have been filmed in Missouri, drawing connections between impressionable youth on either side of the Atlantic. Disappointingly, scenes of junior missionaries are played for laughs while Williams elicits empathy for Ugandan congregations.

In this over-simplified context, Williams depicts Ugandans as easily duped and lacking in agency, and appears to concur with Engle’s view that this “lost” population is ripe for indoctrination. This condescending portrayal of Ugandan society is compounded by the questionable claim that Amin’s brutality conditioned the population to embrace impulsively violent behavior. To support this idea, we see two men, filmed from considerable distance, become embroiled in a vicious fight. The scene is devoid of context and the intended message is startlingly xenophobic: Ugandans are accustomed to hatred.

In these moments, God Loves Uganda sits in stark contrast to another documentary that it should ideally compliment. Call Me Kuchu (Zouhali-Worrall and Fairfax Wright 2012) follows Ugandan LGBT-rights activists as they assert their constitutional right to privacy in court. The film shows incendiary conservative preachers sermonizing, but it also highlights varied experiences and understandings of homosexuality and homophobia. Lawyers, journalists, judges, politicians, activists and their families, friends, and neighbors all speak on camera. They reveal multiple oppressions faced by Uganda’s LGBT population and imply that the battle against homophobia must be waged on a number of fronts and through carefully considered means. The conclusion and call to action offered in God Loves Uganda—stop U.S. Evangelical missionaries to end homophobia and AIDS—is comparably naïve.

God Loves Uganda is well-meaning, but frustratingly simplistic. It is a film about Uganda in which a select few Ugandans speak. Diverse perspectives from civil society are buried beneath the diametrically opposed views of clergymen and political leaders. Their claim that U.S. “culture wars” have been exported to Uganda is an attractive sound bite. Unfortunately God Loves Uganda cannot explain why such a war might be possible.

2012    Taking Up the Cudgels Against Gay Rights? Trends and Trajectories in African Christian Theologies on Homosexuality. Journal of Homosexuality 59(1):114-138.

2002    Same-sex relations in Africa and the Debate on Homosexuality in East African Anglicism. African Theological Review 84(1):81-111.

Siobhán McGuirk is a PhD Candidate in the Department of Anthropology at American University in Washington, D.C. She is also a freelance filmmaker and journalist at Other Than Media and a commissioning Editor at Red Pepper Magazine.