It has been a tumultuous and transformative two years for Egypt.  Since the revolution began in January 2011, the country has witnessed many political events and social upheavals. Facing a blank canvas, how does one paint a revolution?  The salient elements of “confusion,” “patriotism,” and “blood” come to mind, and are accompanied by color imagery. This is a sample of paintings inspired by different junctures of the Egyptian revolution, beginning with the midan in 2011 through the present day (2013).

In Revolution, the black, red, and white of the flag splattered all over the canvas as if the flag burst into a fire, and the entire country was caught in it. In a revolution there is no order, or defined subject but more of dissonance, chaos and uncertainty felt at every level of society.

The Voice of Egypt, on the other hand, was inspired in 2011 during the first 18 days, when everyone was glued to the television watching the rising clamor of the Egyptian people. This painting is an imagining of this voice, and how it reached the sky and challenged the entire world.

‘La’ or ‘No’ was inspired from the first voting process with regards to the proposed amendment of the constitution. Only a minority voted no, and unfortunately events have proven that this was the correct assessment.  ‘No’ is also a refusal and pervasive negativity that extends to all consequences following that voting process.

‘Tahrir & Martyrs’ was motivated by the violence that erupted in the midan against the demonstrators.  Presently, many continue to die from both the civilian and government sides in hopes of birthing a better Egypt and achieving the goals of the revolution: freedom, social equality, and bread for the poor. 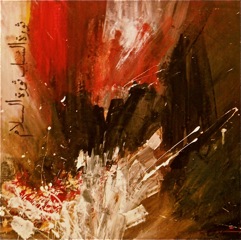 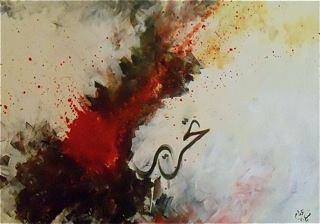 The Voice of Egypt 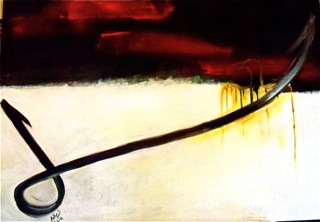 May Kaddah studied Egyptology and received an MA in Islamic art and architecture. Taking inspiration from her studies, she started designing a small stationary line of gift wrapping paper and cards with geometric and pharaonic themes. Today, her stationary is sold in Diwan, Egypt’s most popular bookstore. Although May did not formally study art, she has been fortunate to receive the attention and guidance of renowned contemporary Egyptian artists Leila Ezzat and Zeinab el Seguiny.