On my last trip to NYC, I was overwhelmed with Homeland season four’s new advertisement campaign plastered on almost every public bus in the city. The American political thriller has received overwhelming support, with six Emmys and five Golden Globes. President Barack Obama has even claimed it his favourite show on television.[1] Focusing on CIA agents and their fight against terrorism, the show has received widespread criticism over its (mis)representations of Muslims and Islam, all while maintaining a universalized view of Muslim spaces. Laila Al-Arian has called it “TV’s most Islamophobic show.”[2] Despite this criticism, the show’s newest campaign demonstrates no sign of progress in its representations of Muslims and, specifically, Muslim women.

Producers of the American political thriller revealed that the new season’s plot takes place in Islamabad, Pakistan and Kabul, Afghanistan. Season four’s poster features lead actress Claire Danes (as Carrie Mathison) wearing a red headscarf surrounded by a group of burqa-clad women. Although the poster does not reference a specific location in which the image takes place, by the style of dress of the women in the poster we are to assume that these are Afghan women. In one of the show’s video teasers titled “Target Confirmation”, the same red veil is shown on Carrie as she undergoes a ground mission in Pakistan. As Carrie walks onto the road, the teaser shows a brief close up shot of a Pakistani woman gazing at Carrie. As the teaser goes on, Carrie sees male terrorist suspects and gives the order to destroy them. Upon giving this order she–in slow motion–unwraps the red veil off her head and throws it aside carelessly. The camera then shows a slow motion shot of the red scarf as it makes its way to the ground.[3] The teaser ends with a shot of the CIA led missile explosion and the falling red veil is placed in the center of the frame.

It is important to first acknowledge the varying geographies present in the poster. Considering that the Afghan burqa is traditionally blue in colour and taking into account Carrie’s red veil in Pakistan, the poster blurs distinctions of Muslim spaces by combining varying illustrations of Muslim women’s cultural dress into one image. Homeland’s deep interest and fondness of Muslim women’s attire is consistent all throughout the show’s ad campaign and costume design. It even made it all the way to the episode titles, with season four episode three named after the traditional South Asian dress “Shalwar Kameez” even though the episode’s plot is irrelevant to the attire it references. In its universalized pooling of different cultural and Islamic dress, the show dispenses of any factual articulation of the different meanings behind different forms of covering. Homeland’s point here is not necessarily to depict the specific location of the storyline, rather to visually demonstrate that the show is about Muslims­–and the CIA’s patriotic fight against them.

The poster and the teaser both limit Muslim women’s participation to outer physical appearance. Using images of passive veiled Muslim female bodies to suggest eastern backwardness and western emancipation efforts for eastern freedom is a common trend in popular representations of Muslim women. By removing all forms of active dialogue with the represented Muslim women, Homeland references historic and cultural orientalist stigmas of Muslim women’s ‘passive oppression’ in the face of backward eastern societies. Similar orientalist images have been circulating for decades. For example, circa 1900-1930, European photographers based in North Africa and the Middle East established studios to market and produce commercial postcards displaying images –mostly staged female nudes/veiled/erotic dancers–of the Orient[4]. In his critique of French postcards depicting face-veiled Algerian women, Malek Alloula highlights the colonial de-humanizing implications of these images on the subjects in question. In the case of postcards depicting a group of Moorish women in full veil attire, Alloula argues that the veil is seen by the colonial photographer as a generalized mask; where whenever the photographer captures a veiled woman, “he cannot help but include in his visual field several instances of her […] For it is always a group of veiled women that the photographer affixes upon his plate” [5]. The striking similarities of the aesthetic grouping of face veiled women in both the postcards and Homeland’s poster pose the question: What purpose do these images serve?

In the case of the French postcards, images of veiled Algerian women caught the imagination of western audiences by allowing them to look into the ‘exotic’ life of women in the French colonial east; this imagination thereby allowed for the justification of French colonial presence. Taking into account Homeland’s plot in Afghanistan and Pakistan, season 4’s campaign brings forward colonial fantasies of imagined eastern–Afghan and Pakistani–Muslim women through the praxis of U.S foreign policy. As the traveling colonial postcards repetitively reproduced stereotypes from one western home to the other, Homeland’s traveling poster buses and orientalist moving images also work to recycle and fixate the stereotype of far-away Muslim women as non-resistive passive victims stuck in religion-based fanaticism and turmoil.

For the case of contemporary post- 9/11 North American society, Homeland functions alongside larger political frameworks working to ideologically justify U.S imperialism. Anthropologist Lila Abu Lughod suggests that since 2001, defending the rights of Muslim women was offered as a rationale for military intervention in Afghanistan; thus, images and stories of oppressed Muslim women have been widely circulated in North America and Europe (a timing that is not coincidental). For Abu Lughod, stereotyping Muslim women “distracts us from the thornier problem that our own politics and actions in the world help create the (sometimes harsh) conditions in which distant others live”[6]. As seen in Homeland’s campaign, emphasis on region-cultural depiction works to “artificially divide the world into separate spheres–-recreating an imaginative geography of West versus East, us versus Muslims, cultures in which First Ladies give speeches versus others where women shuffle around silently in burqas.”[7] In the case of the show, it is Carrie playing the role of the first lady.

The campaign’s poster draws on the implications of ‘third world’ vs. ‘first world’ difference through its use of colour and juxtaposition. Presented in deep black, the burqa-clad women are all standing facing forward while Claire Danes looks back and gazes resistively straight at the audience in her bright red scarf and peeking blonde hair. By separating Carrie from her imagined Muslim female counterparts, the poster presents a strong contrast that isolates and labels one party as privileged and the other as voiceless, oppressed and in need of outside intervention. Similarly, the teaser also reinforces such distinctions of privilege through the dramatic visual portrayal of Carrie’s act of unveiling. Homeland’s insertion of the non-Muslim character Carrie Mathison in conflated Muslim spaces illustrates a striking colonial framework that subjugates Muslim women’s imaged bodies for the glorification of Carrie’s western efforts of feminist-based resistance.

What does it mean to have a whole teaser illustrating a non-Muslim American woman unveiling in Pakistan? In removing and disposing of the scarf while veiled Muslim women are present in the scene, Carrie attempts to play out an act of agency against a backdrop of women who are presumed to lack freedom and autonomy. Carrie removes the veil as an affirmation of power, for she has just ordered the killing of a group of threatening male terrorists. Her feeling of empowerment in destroying dangerous men plays out in her decision to unveil. In its insinuations of power dynamics, the scene draws a direct relationship between veiling and ideas of weakness. Similar to the colonial gaze of the French’s postcards, Jasmin Zine borrows the term “imperialist feminist gaze” to suggest the recurring colonial motives played out under the banner of feminism[8]. Zine highlights the collision between feminism and Orientalism, where the two allow for the othering of Muslim women through the lens of the feminist gaze[9]. The imperialist feminist structure creates a binary that inherently juxtaposes ‘oppressed’ third world Muslim women against ‘liberated’ women of the west. Placed alongside Carrie’s unveiling, the close up shot of the Pakistani woman early in the scene visually affirms the imperial feminist binary. The teaser is extremely problematic in its depictions and not only undermines but also blatantly questions veiled Muslim women’s agency in every way.

What is most interesting about the show, however, is that it does not at all focus on specific Muslim women issues or their lives. Homeland’s Western women, like Carrie, are given a highly acknowledged individuality.

In contrast, Eastern Muslim women are simply used to reiterate and support Carrie’s occidental livelihood. The show’s poster campaign and storyline are almost irrelevant to each other in their subject matter. The difference between the two acts as proof of the bleak reality of face-value imperialist feminism for what is really a national propagandist pop cultural creation. For audiences in North America, the ongoing failed depictions of Muslim characters[10] in popular texts only further instigates Islamophobic threats and pushes for the exclusion of North American Muslims from their societies[11].

In order for any form of representational progress–in popular fiction–to occur, we have to reject the idea of imperialist feminism by creating roles that negate existing stereotypes and that actively work to resist and refute them. Marvel comics recently released a new comic series featuring the first-ever lead female American Muslim superhero. The new Ms. Marvel stars a 16-year-old Pakistani-American superhero named Kamala Khan and is on its sixth printing with over 30,000 print copies sold, placing it among the top-selling comics in the market[12]. Created by Sana Amanat, Ms. Marvel provides a positive example in the popular representations of Muslim women. The superhero presents a non-universalized young woman’s negotiations of daily life as a Muslim in America, all while battling super villains. This comic book production not only acts in favour of diversity, but also allows audiences to identify with strong characters with similar relatable experiences and backgrounds. 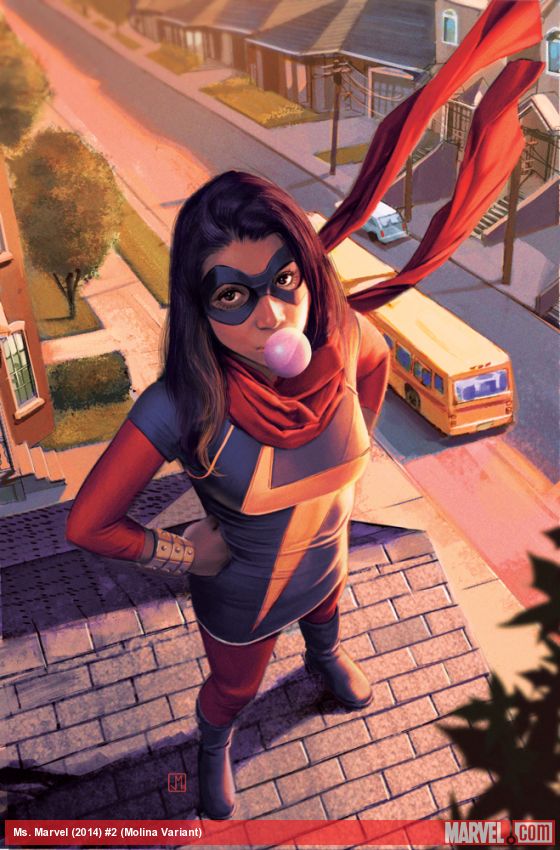 While positive representations, such as Kamala, demonstrate a hopeful move to Muslim audiences, the imperialist-led struggle does not end there. Indeed, the media dangerously enforces and creates marginalizing stigmas, but the real-life danger inflicted on those marginalized–both external and internal–remains harshly present in the everyday. As mentioned earlier, Homeland’s point to focus on non-American human targets and places re-directs people’s attention away from the local American governing villains–who, as Abu-Lughod reminds us, actively work to inflict violence on distant others for imperial gains. For a true re-scripting of the imperialist colonial structure, I urge us to self-reflect on how each of our everyday lives contributes to or resists this imperialist framework. I call for the pursuit of productive decolonial action by locals in Western communities against their local Western powers. Active participatory resistance takes many forms, and creating a lead Muslim female superhero is certainly one of them.

Mariam Karim holds an undergraduate degree in Visual Culture from the University of Toronto as well as an MA in Cultural Studies from McMaster University. Her MA thesis titled Televising Democracy: A Case of Iraqi Reality T.V investigates post-war Iraqi television and its relationship to US-led democracy. She is currently working on a research project that focuses on both archiving and engaging with cyber-based Muslim feminist groups and their role as spaces of anti-colonial feminist resistance. Although primarily based in Toronto, Canada, she currently resides in Cambridge, Massachusetts.