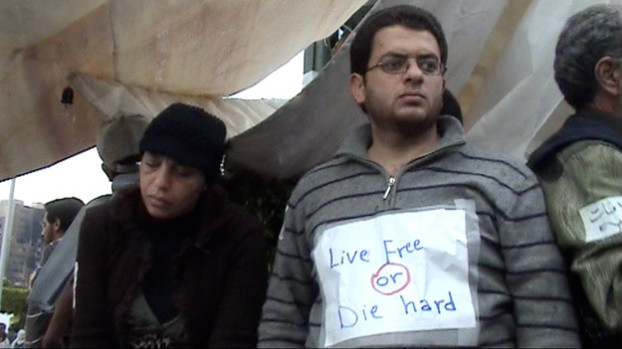 “Civil War doesn’t start when countrymen raise their weapons against each other. It starts when they lose their humanity,” commented Egypt’s notorious political satirist Bassem Youssef, following the military dispersal of two sit-in camps of supporters of deposed president Mohamed Morsi in early August 2013. The following 48 hours led to a reported 1,000 deaths, the same number of fatalities incurred during the eighteen days of the revolution of 2011.

Yet, the local outrage about the carnage is only a fraction of what it was in the early days of the Arab Spring, which led to the end of the three-decade-long presidency of Hosni Mubarak and the subsequent political and ideological confusion that have permeated the subsequent two years.  Facing the overwhelming popular support of the army’s actions are rare voices of protest from some of the young activists at the heart of the 2011 revolution. Now as then, their struggle appears like a lost cause.

Certainly there are realities that are seldom reported outside of Egypt and that should be illuminated. The Muslim Brotherhood – the shadow organization that governed Egypt from 2012 to 2013 with Mohamed Morsi at the helm – is far from the victim it claims to be. The twelve-month Islamist presidency saw  unprecedented division among the population, a catastrophic state of the economy, and a frightening lack of political vision, crisis management and simple communicative aplomb. Egypt has experienced a steep rise in crime, a scandalous alliance with convicted terrorists who boast about their crimes on national television (exemplified by Jama’a Islamiya member Assem Abdel Maged’s lack of remorse when confronted with his attack on a local police station that left 118 fatalities in 1981), and the militarization of the civilian populace through an undetermined number of smuggled weapons trafficked across the borders supposedly guarded by the army. The consequences of continued instability reach beyond Egypt as the Sinai Peninsula has become a welcome hotbed for terrorists who found it easier to operate there than in Afghanistan, Pakistan and Yemen. As one Egyptian protester once put it in the latter days of Morsi’s presidency, “After the revolution, we Egyptians had so many dreams. But the Muslim Brotherhood destroyed all of them.”

The army-supported ouster of Morsi reflected the undercurrent of tension cutting through all segments of society. With the streets packed and the number of protesters exceeding the masses of the 2011 revolution, the only viable result short of Morsi’s resignation, which was not forthcoming, was the intervention of the military. But because most Western countries seemed to have found solace in the fact that the Muslim Brotherhood had won the elections ‘fair and square’ and had begun adapting their policies to the collaborative Brotherhood, the ouster was immediately deemed a coup, and armed vigilantes became “peaceful demonstrators”. There was rarely a mention of scorched churches, attacks on civilians, and daily hate speeches from Brotherhood figures Beltay, Hegazy and Badie (all now imprisoned) on the stage of the infamous protest camp at Rabaa Adaweya Mosque during the forty days between Morsi’s fall on July 3,  2013 and the dispersal of the sit-ins.

While bloodshed is always lamentable, the Muslim Brotherhood’s response to Morsi’s removal deviates greatly from the narrative of peaceful protest they frequently claim in interviews. The protesters killed by Brotherhood members under Morsi notwithstanding, the two pro-Morsi sit-in camps in Cairo were heavily armed and resulted in dozens of casualties among police, the Armed Forces and civilians.

Yet, the actions of the Muslim Brotherhood do not justify the counter-response that left an estimated one thousand dead bodies on Egypt’s streets. When Islamists won an overwhelming majority in the parliamentary elections in late 2011, I was aware of the lack of experience, education and vision of virtually all of its members. I could only laugh at the absence of eloquence and public relations ability. But it was gallows humor. In reality, I resented those who use religion to influence the politically inexperienced public, which is nearly 40 percent illiterate.

Nevertheless, when these dubious representatives entered the parliament, which has never been free of corruption in my lifetime, I was willing to give them the benefit of the doubt. After all, most of them had also experienced years of repression under Mubarak and hoped for a positive surprise from new leadership.

I am not an activist. I am not part of a political group or party. When the revolution of January 25th started, I supported it because there were basic human values that were being addressed: freedom of speech and social equality. While I previously thought that it would be easier to wait until the old man atop the Egyptian throne died, I realized that I had been wrong—only a revolution could bring those changes to the morass of corruption into which Egypt had descended. In 2011, I flew back to Cairo (from New York, where I was studying) a total of six times, almost depleting my financial resources and putting my degree in jeopardy, because I felt I needed to “be there and take part”; that I had wasted most of my youth in apathy and I now had the chance – no, the obligation – to aid my country in its struggle for democracy. As the politics became more sophisticated, however, I stopped coming back. I realized that the power play of opportunism between parties, fractions, religions and classes was not my fight.  I did not vote in the runoff presidential election between Mohamed Morsi (a religious charlatan) and Ahmed Shafik (a stand-in for the just-dethroned old regime); it was not my fight. I was ecstatic when Morsi and the Muslim Brotherhood were removed from power as a result of protests on June 30th, but I did not follow the call of Egypt’s current de facto leader army general Abdelfattah al-Sisy when he asked Egyptians to show their support in the streets and give him a blank check to deal with the ’terrorists.’ This was definitely not my fight, because history has shown me otherwise.

I grew up during the 1990s, a period remembered in Egypt as the era of “terrorism” and “iron fists”. I remember standing in traffic for hours on my way home from school because terrorists had attacked a hotel in Haram Street, or thrown a bomb into the Giza tunnel. But I also remember seeing police cargos filled to the brim with civilians, their hands reaching out the barred windows holding Korans, barely able to breathe. I was only a child, but years later I understood that the crimes of most of these people were having a beard or visiting the mosque too often, or simply being at the wrong place at the wrong time. The iron fist of the police state was in full effect.

The arbitrary nature of how this policy was implemented two decades ago is eerily reminiscent of the events of today. When al-Sisy asked for the people’s support, it brought back not only memories from my childhood, but also the most damaging political quote in recent history, the day George W. Bush declared: ”The world has to decide: either you are with us, or you are with the terrorists.” Nothing is that black and white.

Today, the Bush-like talk of “getting rid of the terrorists,” “leveling Sinai to the ground‚” and “smoking them out of their caves,” has become common language on the streets of Cairo. But one important lesson from recent history is forgotten: after twelve years, even the most optimistic pundits say that the West’s ”War on Terror” has failed. The reason is simple: you cannot fight something you cannot define. For the West, a terrorist is a bearded man in a nightgown who lives in a cave and “hates our freedoms”. The reverse narrative is that a terrorist is a man in a suit who sends soldiers and drones to bomb a village, killing women and children. The truth gets lost somewhere in the middle.

Another forgotten lesson is this: the “terrorist” will always come back. Just as with the Yemeni boy who lost his family in a drone strike, or the Afghan teenager who saw his village destroyed, the children of Egypt’s murdered Islamists will come back to haunt us. After all, what did we show them of the humanistic values we claim to have, the social equality, compassion, the Western model of democracy?

Of course, the argument can be made, “But they are armed! They refuse democracy! They are willing to kill us for their belief!” Absolutely. But we are the “good ones”, aren’t we? We claim to be the role models, the ones who should show them how governance is done right. Instead, we fought them with their own weapons. We descended to their level.

Where will Islamists go after we are “done” with them? If Egypt’s census can be trusted, those who voted for an Islamist incumbent in the first round of presidential elections number more than five million. If we naively assume that only ten percent of them maintain their beliefs after our own “war on terror” is over, that would still leave us with half a million ideological opponents. Will the police kill them too? Will they emigrate? Will they all turn into liberals? Or will they simply vanish into thin air?

One solution has never failed, one that has been reiterated over and over again by the more reasonable minds such as the deliberately defamed Nobel laureate Mohamed ElBaradei:  The key is education. A look at the history of any dictatorship will show it as an element purposely neglected time and again. It is because people who cannot read and write, who do not care about politics, who only struggle to make it through the day and make a living for their children, are easy to control. There is no short-term solution and no quick fix. Educating the coming generation will give the security of a stable democracy, not the thin ice upon which Egypt now stands. In an interview for the Washington Post, then-Vice President ElBaradei attempted to persuade the leadership into accepting a more long term and inclusive solution, stating that, “People are very angry with me because I am saying, ‘Let’s take time, let’s talk to them.’” The mood right now is one that crushes the opposition, and eschews communication. Pragmatically, we need to foster a long-range view based on restoring order and supportive of national consensus and reconciliation.

Note: This article was written in the days after the dispersal of the Muslim Brotherhood’s two protest camps in Cairo in August 2013.

Abu Bakr Shawky is a filmmaker based in New York and Cairo. His documentaries “Martyr Friday”, “Things I Heard on Wednesdays” and “The Colony” have been screened and awarded at festivals worldwide.